A world famous scientist, Dr Thorkel, has built a research lab deep in the amazon jungle, to work free of interference.

He summons three scientists to assist him. When they get there, he tells them that he is losing his eyesight. Even with thick glasses he can not see to record data. After asking them to read some dials for him, he tells them to leave. They are furious at travelling such a long way for so trivial a task.  They refuse to go, and begin snooping.  Their guide, a miner, realizes Dr Thorkel is mining uranium.  Thorkel pretends to be friendly, and eager to explain his research. He lures the three scientists, the guide and Thorkel’s servant into a large chamber. He locks them in, flips the switch and shrinks them to 6 inches tall.

Thorkel kills the old scientist, Dr Bulfinch, but reveals that they will return to normal size over weeks.  The others escape outdoors, but are terrorized by jungle animals that are giant compared to them.  As Thorkel hunts for them, the servant, Pedro, sacrifices his life leading Thorkel away, so the others can escape.  They decide to fight Thorkel and sneak back into lab.  While Thorkel sleeps, they break his glasses.  Essentially blind now, Thorkel stumbles around trying to catch them.  They lure him to the mine.  Thorkel falls down the mine shaft to his death.

The final scene months later shows the miner guide, with the 2 remaining doctors running a lucrative uranium mine.  The 2 doctors, Mary Robinson & Steve Baker, are in love.  They discuss how they can never tell anyone what happened or they will get locked up. 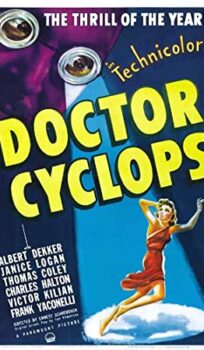