James Bond (Sean Connery) is sent to Jamaica to investigate the murder of a British agent in Jamaica. Bond teams up with Felix Leiter (Jack Lord) from the CIA and learns that someone is radio jamming American rockets from somewhere in the Caribbean.

Bond and Honey are then captured by DR. NO! Dr. No (Joseph Wiseman) has prosthetic hands due to a radiation accident, which explains his nuclear powered radio jammer. Dr. No offers Bond a position with SPECTRE (Special Executive for Counter-intelligence, Terrorism, Revenge and Extortion) but Bond refuses. Bond then survives torture and escapes to sabotage the reactor just in time. He pushs Dr. No into the cooling vat of the reactor and Dr. No is unable to get a grip to escape because of his metal hands.

Bond and Honey escape and are last seen in a boat declining rescue so they can enjoy a romantic interlude. 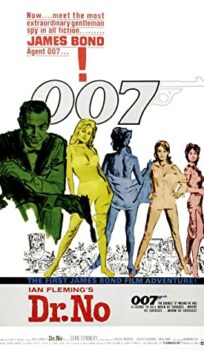