The big, bad vampire that pseudo-vampire Father Uffizi (Jason Scott Lee) is pursuing is actually the Disciple Formerly Known as Judas Iscariot (cut down from his attempted suicide and “converted” by a coven of vampires). It is implied that the elder priest (played by an uncredited Roy Scheider) knows this secret, but he hasn’t bothered to tell Father Uffizi. Just as Uffizi gets the upper hand on the vampire, and is about to finish him off, a now-fully-vampirized-and-in-love-with-the-unead Elizabeth (Diane Neal) appears and impales Uffizi. The two of them depart, saying that they’ll look forward to their next confrontation, as soon as Father Uffizi can get that pesky bolt out of his gut. Satisfying? Logical? No on both counts. Why the heck is this film called “Dracula,” if the word is never mentioned? The director never bothers to show what happened to Luke (Jason London), either. 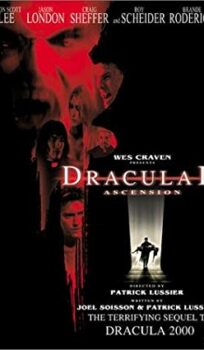