Best friends, Wade and Ryan (Nate Hartley and Troy Gentile) are starting their first day of high school. The day starts out wrong when they accidentally show up in the same shirt. As if it couldn’t get any worse, Wade notices two vicious bullies named Filkins and Ronnie (Alex Frost and Josh Peck) shoving a small, nerdy kid named Emmit (David Dorfman) into a locker. Wade shyly says “stop” and Filkins turns around to look at him in raging anger. He and sidekick, Ronnie shove Wade up Ryan’s shirt. They are called “Siamese queers” and Filkins threatens if they take it off, he’ll pound them.

The next day Emmitt shows up in the same kind of shirt that they were wearing the day before and follows them around like a puppy since Wade tried to defend him. Ryan dislikes him. Throughout the day Filkins and Ronnie do terrible things to the three – duct tapes them to roller chairs and push ’em into walls, hangs them up on doors, while they’re peeing the two bullies show up behind them and turn them around in such a way where Ryan and Wade are pissing on each other. When the three report Filkins to Principal Doppler (Stephen Root) and when Filkins arrives, he acts like a nice, sweet kid and starts acting like he’s sorry. When they walk outta school, Filkins and Ronnie are waiting outside in their car and chase the three around a neighborhood trying to run over them and destroying property. After barely escaping, this motivates Wade to hire a bodyguard.

They interview a bunch of crazy guys who are really expensive. Then Drillbit (Owen Wilson) who is a bum shows up and says it’ll only cost them over $300 a week. He was in the army. His plan is to get inside their houses and steal their stuff, not to help them. At first he teaches them a couple lame lessons how to defend themselves but when they’re yet AGAIN beat up by Filkins, they are angry with Drillbit. Then they go to plan B, the next week Drillbit walks inside school with them and is mistaken for a substitute teacher, which separates him from the boys. Him and an English teacher, Lisa (Leslie Mann) become attracted to each other in the teacher’s lounge and flirt. Once the three boys are dismissed from class, Ronnie and Filkins are waiting in the hall to beat them up. Drillbit runs to them just in time to light a kid’s history project on fire and make the sprinklers go off, causing the two bullies to leave. As a “teacher”, Drillbit takes advantage of his authority and picks on Ronnie and Filkins. He makes Filkins read an awkward book up in front of the entire class, makes Ronnie and Filkins do extra pushups and situps in PE while everybody else watches. cuts their ropes so they can’t get to the ground and fires tennis balls at them in the dark. Him and Lisa have a strong relationship. The boys are happy and no longer bullied….NOT!

While Ronnie and his mom are driving past the beach. Ronnie catches Drillbit taking a nude shower and tells his mother “that’s my teacher!”. She corrects him and tells him that he’s not his teacher, its the guy she passes and gives money to everyday on her way to work. Ronnie realizes Drillbit is a fake and a bum and tells Filkins. Filkins starts bullying the three again and when Drillbit goes to stick up for the three boys, he gets punched and Wade, Ryan and Emmitt run away. When Drillbit and the three boys arrive back at Wade’s home, they see Drillbit’s “friends” (who steal rich people’s stuff) and figure out that he’s been trying to steal their stuff all along, which he actually cares about the boys and he doesn’t want to anymore. He tries to reason with his friends to make them stop but then he’s punched and his so-called “buddies” take Wade’s family’s TVs, furniture and other household items and the boys know he’s a fraud. He admits he was only in the army for half a day and chickened out and left. His real name is Bob because Drillbit was a cooler name he was given when he broke his finger. He hates violence and confrontation so that’s why he always used his authority as a teacher instead of fighting to get back at Ronnie and Filkins. Wade, Ryan and Emmitt oust him and make his leave. Wade tells his family that their house was robbed but thanks to Drillbit’s concern, Drillbit finds his friend who robbed Wade’s house and steals the truck in which Wade’s household items are in. Even though he return’s Wade & family’s belongings, they’re all in the center of the living room rearranged.

Wade, Ryan and Emmitt, their parents and Filkins have a meeting with the unconvinced principal who still thinks Filkins is a good kid and Drillbit was the bad guy. The three nerds try to tell their parents Drillbit isn’t bad and Filkins is the real monster. Nobody believes them. When Wade tries to ask his crush Brooke out, Filkins and Ronnie ruin EVERYTHING and hit him and spray him with soda, even calling her names. Wade then is finished taking their garbage and challenges Filkins to a fight. Filkins says they can fight tonight at his house during a party he’s having. Emmitt says that since Ryan doesn’t care about him, he’s out of the group and flees. After a funny montage of training, Wade and Ryan go to Filkins house and Wade leaves a note at home saying he’ll probably die. Drillbit returns to Wade’s house to return one more item he stole and reads Wade’s note. Wade and Ryan kick Filkins testicles and punch him in the face and think its over but Filkins maintains consciousness and starts beating them again. Wade and Ryan fight back in such a way that their fighting skills to Filkins are equal. Then, Ronnie shows up and starts helping Filkins and Wade and Ryan start losing. Then Emmitt shows up and helps Wade and Ryan. When all three are down, Drillbit appears and tries to convince Filkins to stop but he keeps hitting Drillbit. Somebody tells Drillbit to defend himself but Drillbit says that since Filkins is a minor he can’t. Then one of the fight watchers says “No he’s not, he’s 18”. Drillbit starts whaling on Filkins and knocks him down. He then goes for Ronnie but can’t since he’s still 17. The cops arrive and Drillbit flees. But when Filkins comes out of his house with a samurai sword and throws it at Wade, Ryan and Emmitt, Drillbit catches it before it almost hits them. His pinky falls off and Filkins is taken away by police and is sent back to Hong Kong where first thing he arrives, his dad smacks him upside the head. Drillbit goes to prison but only for 3 weeks since he was in the army (even though it was half a day). We then see Lisa, Wade, Ryan and Emmitt waiting for him as he gets out. At the same time, Drillbit’s friend who tried to steal from Wade’s house is being escorted inside prison by a police officer. 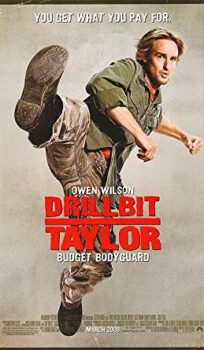