Hell is, in actuality, a large prison run by Satan. When John Milton (Nicholas Cage) sees that his infant granddaughter is captured by a cult who plan to sacrifice her to Satan – Milton breaks out of jail to rescue his baby daughter and destroy the cult.  Milton has supernatural abilities, including healing abilities

Along the way, he meets up with Piper (Amber Heard) who he rescues from her cheating fiancee who had been beating her in the middle of the road. After he tells her about his mission, she agrees to help him. Meanwhile, they are pursued by Hell’s Accountant (William Fichtner) and police officers. They catch up with the cult, but cult leader Jonah King (Billy Burke)  shoots Milton in the face and  takes Piper hostage. With the help of the Accountant  –  who knows that Satan detests infant sacrifice – the two are reunited and evade the police.

They catch up with the cult and the Accountant forces Milton to, initially, face them alone. Jonah King manages to get the upper hand, but then Milton manages to grab the “God-Killer” gun that Piper had dropped and blasts King  into pieces where he will languish forever in limbo. Milton asks Piper to raise his granddaughter for her.  After drinking beer out of Jonah King’s skull as he had promised to do earlier in the film, Milton drives with the Accountant back to Hell while vowing to escape again. 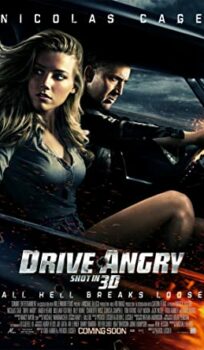