Jesse (Ashton Kutcher) & Chester’s (Seann William Scott) bizarre journey to find their car all comes to a head at Captain Stu’s Space-O-Rama theme park. The transsexual stripper Tania (Terresa Tunney) and her ‘boyfriend” Patty (Claudine Barros) arrive demanding the money they stole, so they open a locker there that they had a key for, and they find the money. The transsexual takes it and leaves, and Jesse & Chester go through the lockers and find more stuff that they accumulated the previous night. However, they don’t find the Continuum Transfunctioner that the hot alien chicks, the Nordic alien dudes, the space cult, and Tommy (Charlie O’Connell) are seeking. They decide to use the Captain Stu tickets they found to get a space-age-looking toy to fool them into thinking it was the Transfunctioner, since no one said what it looked like. However, the charade doesn’t last long when they all arrive to claim it, as one of the Nordic aliens says that that wasn’t it, plus two kids are spotted carrying around the same toy.

Then, Chester solves the Rubik’s cube he’s been carrying around since they found it on their journey, and the cube turns into the Continuum Transfunctioner. However, he started up the self-destruct sequence when he solved the cube, and the universe would be destroyed if it wasn’t turned off. Both the Nordic aliens and the hot aliens claim that they are the Keepers of the Continuum Transfunctioner, and the Nordic aliens claim they hung out with them at Captain Stu’s the previous night and Jesse & Chester gave them a ride back to their spaceship (where they realized they lost the Transfunctioner). Jesse decides to ask them a question that only the ones that were telling the truth would know. They asked what they got on the 18th hole on the mini-golf course there that night, to which the Nordic aliens say “a hole-in-one.’ Jesse confirms it, and the Nordic aliens deactivate it. When their girlfriends Wanda (Jennifer Garner) & Wilma (Marla Sokoloff) ask how they knew about that when they didn’t remember a thing from the previous night, Jesse points to a banner saying that people who got a hole-in-one on the 18th hole got a lifetime supply of pudding, which they found in their home’s kitchen cabinets at the start of the film.

The hot aliens then come together to form a super hot giant alien (Jodi Ann Paterson), and the Transfunctioner ends up back in the hands of Jesse & Chester, who run with it. As the giant alien makes her move to destroy them on the mini-golf course, the space cult tells them they need to activate the Photon Accelerator Annihilation Beam to kill it. But, when they try to turn it on, the button is in too small of a slot to stick their finger in to press it. Chester, remembering seeing a TV show on chimps and how they used sticks as tools, uses a crazy straw he acquired from the locker to hit the button, and the alien is hit with it and explodes. Christie Boner (Kristy Swanson) leaves Tommy for Nelson (David Herman), and the space cult go see the Nordic aliens who tell them that they’ll take them into outer space with them. Jesse & Chester return the Transfunctioner to the Nordic aliens, who thank them, but then tell them they have to eliminate all knowledge of what they experienced that day. Jesse & Chester wake up the same as how their day began, but when it gets to the point where Jesse asks where his car is, they find it is behind a mail truck.

They give their anniversary gifts to a very pleased Wanda & Wilma, but learn the “special treats’ they’ve been promised are berets with their names sewn into them. However, two other gifts are found that Jesse & Chester don’t remember getting for them, two silver necklaces with a red ruby in the center, and as the twins put them on, they read a card and learn it is from the Nordic aliens, thanking them again for helping them. The rubies then glow, causing the twins’ breasts to grow larger. The four then head out for Chinese food and get into a stupid argument over Jesse & Chester’s “Sweet” and ‘Dude’ tattoos. 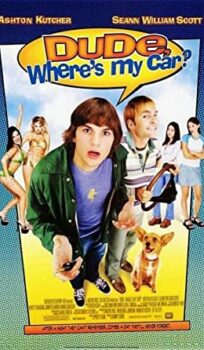