After awaking from his Water of Life-induced coma, Paul Atreides (Kyle MacLachlan) truly becomes Maud’Dib, the messiah of the Fremen people, gaining control over the sandworkms of Arrakis.  He trains the Fremen to become an effective fighting force, using the Weirding Modules to fight back against the invaiding Harkonnen and Empire forces.  Paul succeeds in fighting to the heart of the capital city, where his sister Alia has taken out Baron Harkonnen with her Bene Gesserit powers, finishing him off by commanding a sandworm to devour him.  After finishing off House Harkonnen once and for all by defeating Feyd-Rautha (Sting) in hand-to-hand combat, Paul causes it to rain on Arrakis for the first time in centuries, destroying the spice trade, and fulfilling the Kwisatz Haderach prophecy. 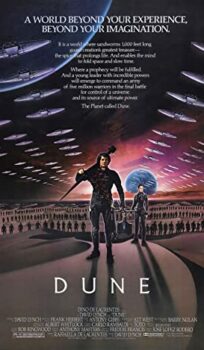