Short version:
A massive earthquake destroys Los Angeles.  Many are killed or seriously injured by falling debris from the quake or the aftershocks.  The last aftershock destroys the Mulholland Dam, flooding parts of the city.

The fates of the stars are as follows:

Long version:
Stewart Graff (Charlton Heston) is a construction engineer who is married to Remy (Ava Gardner), but is also having an affair with Denise (Genevieve Bujold), a former co-worker’s widow.  Stewart works for Sam Royce (Lorne Greene), who is Remy’s father.  Sam has offered Stewart a promotion, but he thinks Remy talked him into giving it in order to save their marriage.

LAPD Sgt. Lou Slade (George Kennedy) has just been suspended by his supervisor for getting in a fight with another cop over the treatment of a suspect.  He goes to a local bar and ignores all the illegal activity going on.  While there, he meets motorcycle daredevil Miles Quade (Richard Roundtree), his business partner Sal Amici and his sister Rosa (Victoria Principal).  Miles needs money to buy a propane tank he needs for a stunt that he hopes will get him a contract at a Las Vegas casino, and Lou lends him the money.  Later, Rosa goes to a grocery store run by Jody Joad (Marjoe Gortner), who’s National Guard unit was just activated due to recent earthquake activity.  Rosa sees Jody as kind because he allowed her to have a bag of groceries she wasn’t able to pay for.  When Jody went home to change into his National Guard uniform, he is harassed by his roommates, who are anti-war protesters.

That morning, a small quake shook Los Angeles.  Seismologists are examining the data from that and other recent earthquakes, and conclude that a big one is coming.  However, they are reluctant to warn anyone for fear no one will

take them seriously anymore if they are wrong.  At the Mulholland Dam, engineers are examining it for damage following that morning’s earthquake.

The big one does hit that afternoon, and the damage is massive.  Falling debris from the numerous damaged buildings have killed or seriously injured many people.  The office building where Stewart and Sam work is heavily damaged, and the survivors need to be lowered down in an office chair.  Just as the last person is lowered to safety, Sam suffers a heart attack.  Stewart is able to rescue him, but he never recovers and dies a short time later.  Denise and her injured son are rescued by Miles and Sal, and are taking them to a hospital when Lou commandeers their truck to use as a makeshift ambulance.  Rosa is arrested by the National Guard for suspected looting, but Jody sees her and pulls her away from the other prisoners.  He hides her in a store and says he’s protecting her, but she is suspicious of him.  Her fears are confirmed when Jody kills his roommates for looting when the evidence was circumstantial.

After Stewart transports some of the survivors, including Remy, to a hospital in his truck, he leaves to search for Denise and her son.  He doesn’t know that Denise and her son are already at the hospital he just left.  While searching, Stewart’s truck is commandeered by Lou to use as an ambulance.  As they are transporting some injured people to the hospital, Stewart and Lou come across Jody’s National Guard unit.  He orders them to turn around, even though that road is the quickest to the hospital.  Rosa sees Lou and screams for help.  Lou jumps out of the truck when Jody grabs Rosa and takes her back to the store.  Jody is mad at her for refusing his help and attempts to rape her.  Lou confronts Jody and shoots him to death when he pointed his rifle at him.  Lou then takes Rosa to the hospital with the other injured, but are stopped when they learn that an aftershock destroyed the hospital.

That aftershock has further damaged the Mulholland Dam, and the engineers are afraid that another aftershock will finish it off.  Back at the hospital, Stewart and Lou are able to locate survivors in an underground parking area.  Remy and Denise are among those survivors.  After jackhammering their way into the area, they begin to pull out the survivors when another aftershock hits.  This one tears a hole in the dam and the whole structure collapses, sending millions of gallons of water towards Los Angeles.  As the last of the survivors are being pulled to safety, the rushing water arrives and sweeps away some of the people, including Remy.  Even though he earlier told Denise that he doesn’t love Remy anymore, Stewart can’t bear to watch Remy get swept away and jumps into the water to rescue her.  However, the rushing water quickly overpowers him and they both drown.  The movie ends with Lou looking back at what’s left of the city and laments that it used to be a hell of a town. 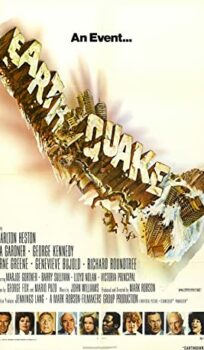