Judd (Neville Brand) a mentally ill war veteran and hotel owner has a habit of snapping when customers arrive at his hotel, killing them, and feeding them to a crocodile that lives in the swamp right next to the hotel. He starts by killing runaway prostitute Clara (Robert Collins). He then kills Roy (William Finley) and ties up his wife Faye (Marilyn Burns) forcing their young daughter Angie (Kyle Richards) to hide under the property.

Judd’s instability increases when Harvey Wood (Mel Ferrer) and his daughter Libby (Crystin Sinclaire) arrive looking for Clara, who is revealed to be his daughter. Judd eventually kills Harvey after he hears Angie’s screams, and later feeds Buck (Robert Englund) to the crocodile.

In the climax of the film, Libby discovers Faye tied up and frees her as Judd forces the crocodile under the hotel to kill Angie. Judd attacks the two, seriously wounding Faye. Libby tries to help Angie up a fence only for Judd to attack them. Faye pulls herself up and pushes Judd into the water and his crocodile eats him. The film ends with the Sheriff arriving at the hotel after being tipped off by Lynette (Janus Blythe), a potential victim of Judd’s that got away. 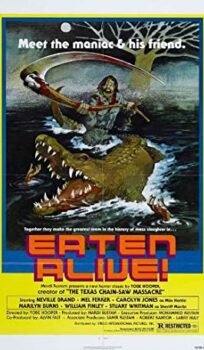