POOPER
Eddie qualifies as a ski jumper for the 1988 Calgary Olympics for the 70 meter hill.  He finishes last, but his enthusiasm wins over the crowd and the media dub him Eddie the Eagle.  Not wanting to be known as a novelty, he also enters the 90 meter event, and finishes last again.  Bronson and Warren bury the hatchet and are on speaking terms again.  After the Olympics, Eddie and Bronson agree to continue training for the next Olympics.

LONG VERSION
As a child, Michael “Eddie” Edwards wanted to be an Olympian, but he wasn’t very good at any sport.  His mother would always encourage him, but his father wanted him to wake up from his Olympic dream and come to work with him as a plasterer.  He finally gives up on the Summer Olympic sports, and decides to try for the Winter Olympics as a downhill skier.  Now grown up, Eddie (Taron Egerton) has achieved success and plans to try out for the British Olympic team that will compete in the 1988 Olympics in Calgary, Canada, but they won’t let him compete in the trials because they don’t consider him Olympic material.  Undeterred, Eddie decides to try his luck in a sport he’s never competed in before:  ski jumping.  Upon realizing that the UK doesn’t even have a ski jumping team, Eddie takes it upon himself to travel to Garmisch, Germany, the home of the top training facility in Europe, and will become a one-man team.

Now in Germany, Eddie is constantly picked on by the more experienced jumpers, particularly the Norwegians, considered the best in the world at the sport.  Without a coach to guide him, Eddie self-trains and soon is able to successfully land on the 15 meter hill, the smallest in Garmisch.  However, he crashes every time he attempts the 40 meter hill, the next largest.  After one failure after another, Eddie meets the facility’s snow groomer, Bronson Peary (Hugh Jackman), who tells him that he should give up before he breaks his neck.  Eddie, who by this time has befriended Petra (Iris Berben), the local tavern owner, finds out from her that Bronson was a member of the US ski jumping team before he was kicked off the team by their legendary coach Warren Sharp (Christopher Walken).  Eddie approaches Bronson about being his coach, and he says no.  But after seeing Eddie’s determination at being a ski jumper, he gives him some advice, and Eddie uses that advice to finally land on the 40 meter hill.  He goes back to Bronson and asks again to be his coach so he can compete in the Olympics.  Bronson tells him that the minimum height for the Olympics is 70 meters, and he will kill himself if he tries it.  Eddie tries the 70 meter hill anyway, and promptly crashes and is seriously injured.  In the hospital, Bronson tells Eddie that he will be his coach, so he doesn’t have to watch him try to kill himself again and again.

Bronson has Eddie enter an open tournament, and if he can land the jump from the 70 meter hill, he will qualify for the Olympics.  He does, and he even sets a British ski jumping record with a distance of 34 meters.  But upon returning to Britain, Eddie learns from the British Olympic Association that they have set the limit to qualify at 61 meters in a sanctioned tournament, so his jump in Garmisch doesn’t count.  Even if he makes the new limit, they don’t want him in the Olympics for fear that he will be a national laughingstock.  Eddie, still determined to qualify for the Olympics and with help from his mother, gets the money needed to join the European Ski Jumping Tour and bring Bronson along.  In the various tournaments, Eddie is able to go further with each jump, but not far enough to qualify.  Between the events, Bronson is using unusual methods to improve Eddie’s form, and it’s making him a better jumper.  Bronson is also able to get better equipment for Eddie than what he had been previously using.  In the final tournament before the Olympics, Eddie travels 61 meters in the qualifying jump.  However, he crashes on his official jump and fails to make the Olympic team.  Devastated, Eddie calls his parents and tells them he finally agrees with his father that his Olympic dream is over and will go to work with him as a plasterer.  But before he leaves Garmisch, Eddie learns that his qualifying jump did count, and he has made the Olympic team.  He goes to tell Bronson the good news, but he tries to tell Eddie he should train some more and try for the following Olympics in four years, and not settle for last place and making a fool of himself.  Eddie wants to compete now, and since Bronson won’t support him, he fires him.

Upon arriving in Calgary, Eddie is tricked into getting drunk by the other members of the British Olympic team, and misses the Opening Ceremonies.  Now sober, Eddie makes it to the 70 meter event and successfully lands with a distance of 60.5 meters, which breaks his own distance record.  Even though he finished last, his exuberant celebration wins over the crowd, and the commentators quickly dub him Eddie the Eagle.  However, Bronson is watching on TV and is not happy with Eddie’s antics, and he calls Eddie and scolds him for not taking the sport seriously.  That was the reason he was kicked off of the US team.  The next day, Eddie appears before the media and apologizes for his behavior, and to show that he is more than just a novelty, he enters the 90 meter hill event, a height he’s never attempted.  A shocked Bronson decides to go to Calgary and offers to coach Eddie for this event, which he accepts.  On the day of the event, Eddie is nervous as he climbs up the hill, but he is joined by Matti Nykanen, the number one jumper in the world.  He offers his support, and that gives Eddie the confidence to do the jump.  He successfully lands at 71.5 meters, another British record, and good for another last place finish.  Despite that, he is cheered by the crowd, and is even mentioned by the President of the Calgary Olympics during the Closing Ceremonies.  During the celebration, Bronson runs into Warren, his former coach.  They proceed to bury the hatchet and are on speaking terms again.

The movie ends with Eddie and Bronson flying to Britain, and they agree to continue his training for the next Olympics.  Upon landing, they are greeted by a cheering crowd at the airport.  His mother and father are also there, and his father finally warms up to him being an Olympian. 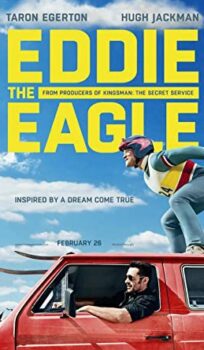