When Ed (Matthew McConaughey) has a meeting with the executives of the North West Broadcasting Company about his show, they tell him they want to extend the show, and his contract, for another three months. However, having grown disheartened over being filmed all the time and Shari (Jenna Elfman) unwilling to start a relationship with him unless he ends the show, he tells them he’s quitting. The head executive Whitaker (Rob Reiner) tells him that his contract prevents him from quitting, and he would be breaching it if he did quit, making him liable for any financial losses the network sustains.

After finding out that the network is now also filming Shari and his family, not just him, he decides to blackmail the executives into ending his show. He tells everyone watching that he is having a contest, and he will give $10,000 to anyone who can dig up the most embarrassing and humiliating information on any of the network executives, and he will reveal the information live at 9 p.m. that night. That way, the executives will have no choice but to stop airing the show before he can reveal anything. The executives try to stop him legally, but can’t because he isn’t showing reckless disregard for the truth. Cynthia (Ellen DeGeneres) – the executive who came up with the idea for ED TV but now has sympathy for Ed – then quits, tired of the other executives’ despicable behavior.

That night, Cynthia calls up Ed in a disguised voice and tells him that Whitaker has to pump a liquid into his penis in order to get an erection. As Ed is revealing this info live, Whitaker – knowing Ed is talking about him – takes his show off the air for good, just before he reveals it’s him. Finally free of the show, Ed begins his relationship with Shari. 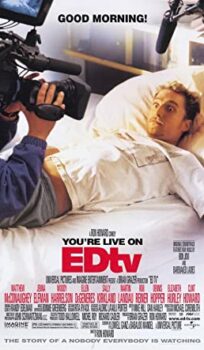