After a series of bad events that irreparably damage the reputation of Edward (Johnny Depp) in suburbia, Edward flees back to the old mansion, where his love Kim (Winona Ryder) and her family knows he’d be safe there. However, when Kim goes to check on him in the attic of the mansion after suspecting he had been killed or hurt by police gunfire during his dash for home, her jealous boyfriend Jim (Anthony Michael Hall) follows and attempts to kill Edward. After a tough skirmish, Edward stabs Jim in the stomach with one of his hands and sends him out the attic window to his death on the ground below. As the townspeople grow nearer to the mansion’s entrance to learn of the fate of Edward, Edward tells Kim goodbye, and she kisses him and tells him she loves him.

Kim races downstairs and finds a scissorhand glove, which she takes and brings outside, and she ensures Edward’s safety by telling the townspeople that Edward died when the roof caved in on him, and Jim was killed in the process. She holds up the glove to prove it. Everyone buys the lie, and they all return to their homes.

It cuts back to the present, where the old woman telling the story to her granddaughter says that she never saw him again after that night, and we soon learn the old woman is actually Kim. The granddaughter tells her she could still go up and see him, but Kim tells her that she is an old woman now, and she prefers it that he remember her the way she was. When the granddaughter then asks her if she thought he was still alive, she says she’s not sure, but she believes he is because it never snowed before he came to the town, and after he left, it did. It last shows the still-living Edward making ice sculptures in the attic, the snow coming off of them flying out the attic onto the town. 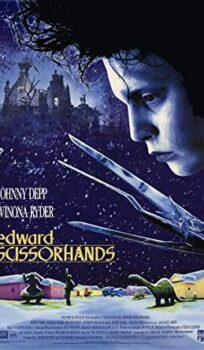