Spain is divided into Christian and Moorish strongholds. The young Rodrigo (Charlton Heston), shows mercy to some captured Moors and lets them go following his victory, earning a lifelong ally in Emir Moutamin, who dubs him El Cid (The Lord).  When he returns to court, he is accused of treason for this and the King’s champion, his fiancée Chimene’s father, insults his family’s honor to the point where a duel begins. Rodrigo wins, killing him.  Chimene (Sophia Lauren) swears vengeance, but her plot to have him killed fails and she is given in marriage to Rodrigo.  The marriage is not consummated and she enters a convent.

When the old king dies, the kingdom is split between his three children.  The eldest son, Sancho, imprisons his brother Alfonso.  Rodrigo frees Alfonso, earning him the short-lived gratitude of Alfonso and his sister Urraca. Meanwhile, Ben Yssef, an African warlord interested in conquering Spain, takes this moment to assassinate Sancho, with the help of Uraraca and Alfonso. Alfonso takes the throne and, when Rodrigo challenges his role in his brother’s death, exiles him. Chimene, moved by her husband’s nobility, goes to join him.  However, their dreams of a quiet life are disrupted when they find an entire army has followed Rodrigo, wishing to serve under him.  He agrees, going to battle the invasion of Ben Yssef, and she returns to the convent.

Years pass, El Cid has become famous, as much for his victories on the battlefield as his refusal to follow the dictates of Alfonso.  Alfonso, to spite Rodrigo, imprisons his wife and twin daughters. Rodrigo lays siege to Valencia, and capturing it, sends its crown to Alfonso.  Alfonso, finally realizing Rodrigo does not wish his throne, but merely for his King to be worthy of it, rushes to his side.  But before he can arrive, Rodrigo is wounded and his absence during the battle causes panic and his men retreat to the castle.  Rodrigo insists that they remove the arrow, though it will kill him, knowing that his men will falter without their hero to lead them.  Alfonso arrives as the Cid is dying and they make their peace.  The next morning the Cid’s body is strapped to his horse and the King rides beside him into battle. Chimene takes her daughters to the parapets to watch their father’s last charge. The Spanish army charges the startled army of Ben Yssef, who had thought the Cid dead, and they are victorious. 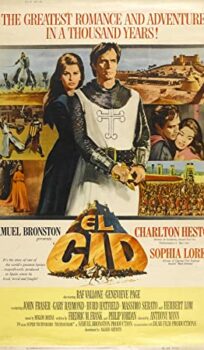