After getting kicked out of the stripper club, along with his pals Moon and Rubén, Luis goes home and takes a bubble bath.  He falls asleep and finds himself having a dream that’s a reminiscent of the Matrix, in which he fights the black woman with the big breasts.  He wakes up, but then, as he steps out, he trips and hits his head, dying.

The entire bunch from the “Vacilón” radio show comes to the funeral; some mourn for him, others, not necessarily; and it seems like the end of the movie, but it’s not.  We then see Luis visiting notorious pot-headed pal Findingo, commenting him that he wasn’t able to find an actual ending, because he was suffering from a block.  Findingo suggests him to make a cartoon version, to which Luis scoffs -there is also a sequence of a subplot about Findingo’s first arrest for carrying pot on himself- and leaves.  However, Luis thinks about it, and then we are shown a goofy cartoon sequence between Luis, Moon and Rubén, up to an END title.

Then, we see Luis, Moon and Findingo sharing their toughts about the ending; Luis still thinks something is missing, and Findingo pleads for a finale “DE PINGA!!” (a slang-Spanish way to say “Wicked!!”, but making reference to the penis).  Then, a gigantic penis comes crashing over them.  This one seems like the definite end.

The credits start rolling, and then we are shown some filming bloopers, including one from the cartoonish version, in which they mock and attack Immigration’s abusive actions against illegal immigrants.  And that’s it. 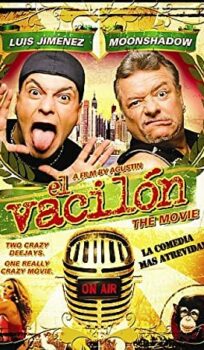