Short version:
Tracy Flick wins the school election, and teacher Jim McAllister has to resign after being caught manipulating the result in an effort to make Paul the winner.

After her election banner falls off the wall, Tracy destroys all the banners in anger. Although Tammy observed Tracy disposing the shreds, she tells the principal that she did it, and is excluded from the election and the school, and her parents send her to a catholic boarding school.

McAllister is trying to have an affair with his “lonely” neighbour Linda (Delaney Driscoll), who had divorced her husband (also a teacher at the school) after he had an affair with Tracy. However Linda confesses all to McAllister’s wife, and so he has to leave the house, sleep in his car, and is slowly losing his mind.

On election day, the counting is first done by two students. According to them, Tracy wins by one vote. McAllister just hates to see her win, and disposes two Tracy-votes into the garbage bin, so Paul becomes the “winner”.

The next day, the fraud is discovered thanks to the janitor, who finds the two “missing” votes. (Which is a payback by the janitor, who had witnessed McAllister throwing food on the floor at the beginning of the movie). Tracy is the real winner, and McAllister resigns.

McAllister’s wife divorces him and he loses all but his small old car, and can’t find a teaching job because of the media echo. Paul goes to college, has fun and is popular, although Lisa breaks up with him. Tammy has fun at the catholic school, smokes dope and finds a lesbian soulmate. Tracy finds out that she doesn’t have many friends in school and later in college. McAllister becomes a museum guide in NYC and has a new girlfriend. At a visit in Washington, he observes that Tracy is now the assistant of a congressman. 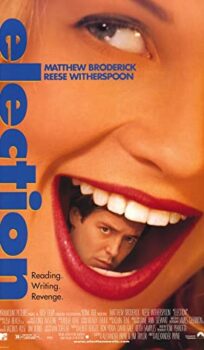