Ella (Anne Hathaway) breaks the obedience spell by believing she could right before she’s about to plunge a dagger into Prince Char’s (Hugh Dancy) back.  Uncle Edgar (Cary Elwes) killed the Prince’s father so that he could rule.  He was going to kill the Prince during the coronation with a poisoned crown.

Ella breaks up the coronation and tells the Prince about everything while they fight off the guards.  Mandy (Minnie Driver) casts a spell that turns her boyfriend/book Benny (Jimi Minstry) back into a person who helps with the fight.

Uncle Edgar’s greed gets the best of him.  He grabs the poisoned crown and puts it on instantly dying.  So Prince Char becomes King and marries Ella. 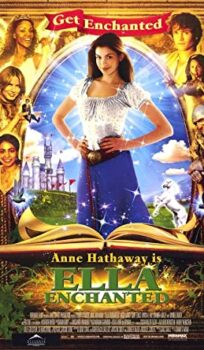