The movie opens with a ship secretly dropping barrels of radioactive waste into the ocean.  It then cuts to a boat taking potential buyers to a real estate development on “Dream Island”.  Marilyn Fraser (Joan Collins) is a slimy sneaky real estate saleswoman who is abusive and condescending to the boat captain.  Radioactive waste washes ashore and is eaten by ants.   Giant ants attack the group and kill several, including both elderly couples.  Ants destroy the boat. There is a town on the other side of the island, around a sugar refinery.  The survivors set off on foot for the town.

When they reach the town, the people seem friendly, but act strange.  The townspeople will not let them use a telephone or rent a car.  When they try to escape the town, they are arrested and forcibly taken to the refinery.  In the refinery, they find a nest of giant ants, with a giant queen ant.  The queen releases a pheromone that brainwashes the people and makes them serve the ants.  The group is put in line to be sprayed by the queen.

The boat captain has signal flares in his pockets that he retrieved from the sinking boat.  He sends a flare at the queen, frightening her.  Her distress causes all the brainwashed people to go into panic.  He lights a few more flares, starting several more fires.  The young guy in their group drives a gasoline tanker into the burning building, jumping out and running away at the last moment.  The explosion kills all the giant ants.  The only survivors are the young couple, the boat captain, and the nice lady who wanted to start a maid service on the island. 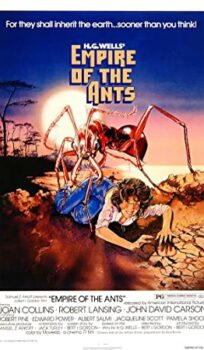