SHORT VERSION:
The earlier-arrested young shoplifter “Warren Beatty” later visits the store a second time, but this time toting a gun loaded with blanks. He fires off a few rounds, but the store employees – specifically Joe and Lucas – defuse the situation by offering him a job at the store, realizing that he just needs a second chance. The cops soon come and arrest him, though they tell Joe that not much will be done to him since he is a minor and he shot blanks.

The employees then pool together whatever money they have to try to cover the $9,000 that Lucas lost, but find they are several thousand short. Mark then gets an idea for them to hold a midnight benefit event to save Empire Records from becoming a Music Town location, and he announces this live on TV to a news reporter covering Warren’s arrest. The rest of the staff get on board with this idea, and come midnight, they put out donation receptacles and get together drinks, food, and merchandise to sell, and Berko and his band provide live entertainment. There is a huge turnout, and an angry Mitchell shows up in the midst of it. Shortly after Joe tells him that he “loaned” the $9,000 to one of his employees, he hands him a jar full of money and tells him that this should cover it. Mitchell then decides to sell Empire Records to him for a cheap price, since he doesn’t like the place and Joe does, and the store’s independence is maintained.

In addition to the above, A.J. and Corey profess their love for each other and become a couple, with A.J. even telling Corey that he will be attending art school in Boston so he can be near her when she attends Harvard. Gina satisfies her desire to sing in a band by singing with Berko’s band during the benefit. Debra reveals to the others that the reason she tried to kill herself was because she long felt she was invisible and the act was more of a cry for attention than anything, but everyone assures her that they love her.

LONG VERSION:
Corey (Liv Tyler) eventually comes on to Rex Manning (Maxwell Caulfield), whom she has a crush on, but when he starts to unbutton his pants in preparation for putting blue cheese dressing for a salad he is eating onto his penis, she backpedals out of the whole thing and retreats to the roof (though Rex evidently wanted to turn her off). Suddenly, she gets approached by A.J. (Johnny Whitworth), and A.J. takes the opportunity to finally profess his love for her, but she replies that she just isn’t in the right frame of mind to be hearing this because she just threw herself at Rex and made a fool of herself. She then asks him to leave her alone for a while, so he does, in parting telling Corey that they should just pretend that he didn’t say anything.

Corey later has lunch with Gina (Renee Zellweger) and tells her all about her episode with Rex, and she tells Corey that they will get her another guy. Corey replies that she doesn’t want another guy, and basically tells her that she isn’t a loose woman like she is and asks why she is always trying to make her into a copy of her. Her feelings hurt, Gina calls Corey a mean person and stomps back to Empire Records. When Corey returns to work, we see that she secretly uses speed, and she then finds A.J. so they can talk about their prior interaction. She says that, when he confessed his feelings for her, she freaked out over it because she sees him as more like her best friend, and she thinks they have something better than a romantic relationship. He responds by telling her that they both know that that is wholly untrue, then he walks away. Meanwhile, Gina seduces Rex and has sex with him in the photocopier room.

After Joe (Anthony LaPaglia) finally knocks around Lucas (Rory Cochrane) a little in his office for losing the $9,000, he notices that Rex is missing and asks A.J., Berko (Coyote Shivers), and Debra (Robin Tunney) – who all came to watch the proceedings – where he is, but Debra replies that a better question to ask is where Gina is. Joe then hears noises emanating from the photocopier room and figures out that Gina and Rex are in there, and Corey soon walks in and tries to get into the room, but finds the door locked. She asks Joe and the others where Gina and Rex are, but everyone remains silent and won’t make eye contact with her, and she realizes who is on the other side of the door. Rex and Gina then emerge, and A.J. suddenly launches himself at Rex, but Joe and Corey pull him off of him. After Rex punches A.J. in the face, Joe orders Rex to leave the store, and when Rex asks where his assistant Jane (Debi Mazar) is, Joe lets him know that she had earlier quit and took off (spurred by having a talk with Joe and accepting that being Rex’s assistant is a dead-end job, especially since she doesn’t like him or his music). Rex leaves after the staff hits him with a few choice insults, and as Joe tends to A.J., he tells Gina to go home. Corey and Gina then get into an argument over what just took place, and Gina yells out that she knows she uses speed, then gets her secret stash from her cubby hole and throws the pills all over the floor while also deriding her for trying to be so perfect. Joe once again tells Gina to go home, and Corey goes berserk and starts trashing the store until Joe and most of the other employees restrain her, then Debra takes Corey into the bathroom to calm her down. Jane later returns, and she asks Joe if he needs a new night manager before asking him out to dinner, and he accepts the offer.

In return for caring for her, Corey decides to stage a mock funeral for Debra in the staff area, since Debra had survived a suicide attempt before coming in to work that day, and Joe and most of the staff participate in it. When each person is given a chance to say something, A.J. tells everyone that he wants to go to art school, but is afraid to. Corey then admits she misses Gina and envies how she isn’t afraid of life or to be herself, unlike her, and wishes she could be brave like her. Gina then suddenly appears, having overheard what Corey just said, and she replies to Corey that she is brave because she is getting out of Wilmington and going to Harvard, and she herself hasn’t always done what she wants to do. She then confesses that she always wanted to sing in a band, but has never had the guts to even audition, and she feels she needs to do something or else she will end up like her mother, whose gave up on life after high school. Corey assures her that she won’t be like her mother if she doesn’t want to be like her. After Lucas tells everyone all about how he was a troubled youth until Joe took him under his wing when he was 13 and helped him turn his life around, Debra unravels her wrist bandage and explains that she tried to cut herself with a shaving razor and it was a rather dull one at that, and she did it as a cry for attention because she has long felt like she was invisible to everyone. She is assured by the others that they love her.

Just then, “Warren” (Brendan Sexton III) – a younger teen earlier arrested for shoplifting and who vowed to return as he was being taken away – re-enters the store with a revolver loaded with blanks and fires off a couple of shots. Joe orders the others to call 911 and then goes out to face Warren, as do a few of the other employees, and Warren rails against them for thinking that they are so superior because they work in a record store, then criticizes Joe for not punishing Lucas for stealing from him and asks if he would give him a job now for trying to steal from the store. The others, especially Lucas, then surmise that Warren actually does want to work at Empire Records, so Joe decides to hire him on, thinking that he needs a second chance like Lucas. After the cops come, they tell Joe that not much will be done to Warren since he is a minor and there were blanks in the gun, and the staff wish him well as he gets escorted out again.

Joe then decides to call the store’s owner Mitchell (Ben Bode) to let him know about the missing money, but the staff and Jane stop him and try to pool together various resources to cover the lost cash. However, they are only able to come up with $3,056. Lucas admits defeat and tells Joe to put in the call, but a light bulb suddenly goes off in Mark’s (Ethan Embry) head, and he runs outside and goes up to a news reporter covering Warren’s arrest and announces on live TV that Empire Records will be holding an impromptu party at midnight, planning to raise the remaining money that way and save the store from becoming a Music Town Records location. When he returns to his co-workers, they have seen his announcement on TV and decide to put this idea into action. Come midnight, the staff has set up donation receptacles and gotten together food, drinks, and store merchandise to sell to the people, and Berko and his band provide live entertainment (and Gina later takes the opportunity to perform lead vocals for them).

A large number of customers turn up and the staff starts to rake in the money, but a fuming Mitchell shows up in the midst of this and storms up to Joe demanding to know what is going on. Joe informs him of how the bag he earlier gave him that he said contained last night’s deposit actually didn’t (he had stuffed it with scrap paper), and he lent the money to one of his employees. Lucas then approaches the duo and lets Mitchell know that, once Music Town Records moves in, he and all of the other employees will be moving out, and Joe adds that he will be opening up his own music store with them, with the start-up capital being provided by the money being raised here tonight. Joe then quits, and he and Lucas walk out into the store. Warren also shows up once again, but this time with his new store nametag on. Soon after, Joe hands Mitchell a jar full of money and explains that this should cover the missing funds, and Mitchell replies that he will instead sell Empire Records to him for a cheap price, since he has never liked the place and Joe always has, and Joe tells him that they have a deal. Moments later, Corey goes up to the roof to see A.J., who is working on the store’s sign, and she tells him that he had better go to art school because he has more than what it takes to be a good artist whether he knows it or not, and then admits that she loves him, too. A.J. informs her that he will be attending art school, but in Boston, so that way he can be near her when she attends Harvard. The two of them then share their first kiss.

The movie ends with Joe, Jane, and all of the staff (Warren included) having a dance party on the roof to celebrate maintaining the store’s independence. 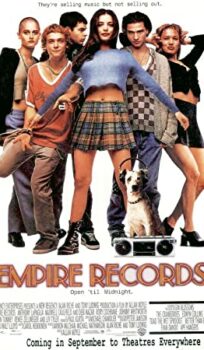