Pooper:
The flower child from earlier in the film becomes the new Queen. M.K returns home and keeps in contact with Nod.

Long version:
The after death of her mother, M.K (Amanda Seyfried) goes to live with her father (Jason Sudeikis), a professor who spent his life looking for tiny soldiers hidden in the forest. Ashamed by his unwillingness to be a normal dad, M.K leaves a farewell note and takes off, but not before her dog runs away into the forest.

As it turns out, the tiny solders are real, called the Leafmen, lead by Ronin (Colin Farrell) who serve and protect Queen Tara (Beyoncé Knowles). When the Queen begins a ceremony to choose her next heir, the Leafmen are attacked by the Boggans, lead by Mandrake (Christoph Waltz) and his son Dagda (Blake Anderson).

During the battle, both Dagda and the Queen are killed. With her last dying breath, she entrusts the pod of her heir to M.K, who accepts, but unbeknownst to her, makes her shrink in size. Mandrake swears revenge for the death of his son.

M.K, along with Ronin, Nod (Josh Hutcherson), Mub (Aziz Ansari), and Grub (Chris O’Dowd), venture off to see Nim (Steven Tyler), who tells them the pod must bloom in the light of the full moon to become the new Queen. Meanwhile, Mandrake learns if the pod blooms in darkness, he can control it. During an ambush, Mandrake steals the pod, along with Mub and Grub.

M.K and the Leafmen successfully rescue Mub, Grub, and the pod, and bring it back to Nim to bloom in the moonlight. However, Mandrake counterattacks, using his army of bats to block the moon. M.K realizes the only person who can save the pod is her father, who uses his iPod to play bat sounds that attract the bats away from the moon.

Mandrake and his army are finally defeated and the pod blooms. The flower child from earlier in the film (who idolized Queen Tara and saved her from an attack) becomes the new Queen. M.K rekindles with her father, is brought back to normal size and returns home. Using her father’s equipment, she keeps in regular contact with her new friends. 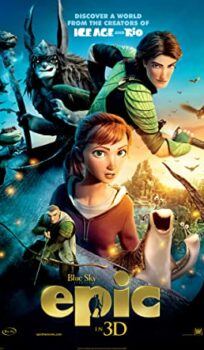