When Ernest (Jim Varney) gets fried in the electric chair, he absorbs all of the electricity into his body, becoming a living electrical capacitor. He uses all of this power to make his way through the prison and eventually break a hole in the prison’s main entrance so he can escape. Rubin (Barry Scott) stops him in the midst of his exit, intending to do him harm, but Lyle (Randall Cobb) comes to Ernest’s aid and knocks Rubin out. He tells Ernest to stop Nash (also Jim Varney) before he robs the bank where Ernest works, and Ernest thanks him and departs.

After getting a change of clothes from home, he heads to the bank, where he finds that Nash has put a bomb on the vault door and tied Charlotte (Barbara Tyson) and Chuck (Gailard Sartain) to it, intending to kill them along with robbing the bank. Ernest and Nash fight, with Ernest getting pummeled, and though Bobby (Bill Byrge) tries to drop the electrified criminal cage from the ceiling onto Nash, it misses him. Nash then electrocutes Ernest on the cage, but this causes Ernest to become polarized, giving him the ability to float. He uses this ability to eventually knock out Nash. Then, he grabs the bomb and floats off into the sky with it, where it explodes.

The cops come in, but Nash awakens, gets his gun, and makes the few armed cops drop their weapons. Before he can take Charlotte (Barbara Tyson) out of the bank as a hostage, a burnt Ernest drops down on top of him, knocking him out again. Before fainting, Ernest declares “I came, I saw….I got blowed up.” 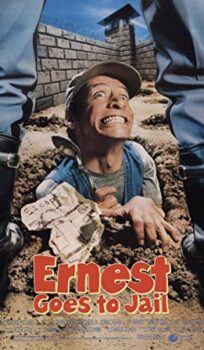