At the school Halloween dance, Trantor (Jonas Moscartolo) obtains his final soul needed to release his troll army, but his weakness – milk – is revealed to Kenny (Austin Nagler). Trantor also turns Ernest’s (Jim Varney) dog Rimshot into a wooden doll before leaving for the treehouse. Enraged at this, Ernest heads to the treehouse to kill him, with the parents of the town following right behind. Meanwhile, Kenny and a group of kids go to a local store, grab a lot of milk products and squirt guns, and head for the treehouse.

They arrive just as Ernest and the others are fighting a losing battle against the newly-released trolls. With the milk, Ernest and the kids kill all of the trolls, and Old Lady Hackmore (Eartha Kitt) comes and places some wooden dolls she owned into the hole in the tree that housed the other dolls Trantor had placed. In the midst of all this, Trantor goes into the pit below the tree and calls for many evil spirits to strengthen him, turning him into a near-invincible troll that even milk cannot kill.

He emerges soon after Ernest has killed the last of the trolls, creating a wall of fire around the treehouse to keep Ernest in and everyone else out, and then he knocks Ernest to the ground. He turns Kenny into a doll, making him even stronger, and then he jumps to the ground and prepares to fight Ernest. Ernest arms himself with milk, but then he remembers Old Lady Hackmore’s words about how only “unconditional love – the heart of a child” could truly beat Trantor. He drops the milk and proceeds to dance with and kiss Trantor, overwhelming him with love and affection, which makes him explode. 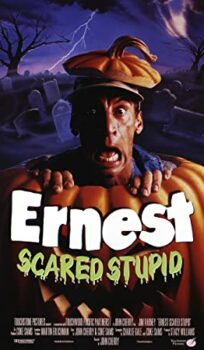