Pooper:
Jim apparently dies of the cat flu in his family’s hotel room. We then see another version of Jim checking into his Disney hotel with a new, hot wife and daughter.

Long Version:
This film was shot without permission and guerilla-style on location in Disney Land and Disney World. Ultimately, Disney decided not to take legal action against the film. The film is very open to interpretation.

We open with Jim (Roy Abramson) on his hotel balcony speaking with his boss. The boss tells Jim he is fired, but gives no reason. Jim goes back in his hotel room and leaves to take the tram to Disney with his wife Emily, and young children Elliot and Sara. On the way to Disney, the family cross paths with two flirtation teenaged French girls. Jim becomes obsessed with them.

On the rides, Jim begins to hallucinate. The faces of his family and the animatronics morph into demonic visages. He imagines his wife telling him that Elliot is not his son. Later, they split up, with Jim taking Elliot to ride the Buzz Lightyear ride. They wait in line for hours, but the ride is shut down just before they board. Jim then sees the French girls and follows them around the park, including onto the Space Mountain ride (whereon Elliot pukes). Jim imagines himself cuddling with the teen girls.

After Elliot pukes, Jim meets back with his wife, who takes Elliot back to the hotel. Jim stays at the park with Sara. It is clear he has a closer relationship with Sara than with Elliot. While Sara is playing with a young boy, the boy’s elderly mother strikes up a conversation with Jim. She wears a huge necklace that appears to hypnotize Jim and causes him to black out. When he wakes up, he is tied to a bed and in mid-coitus with the elderly mother in her hotel room. Once they are done, he quickly flees with Sara (who was sleeping in the next room). On another attraction, Sara gets injured. They go to the park’s nurse, who mentions an outbreak of cat flu infecting certain park-goers.

Jim and Sara return to the hotel and go to the pool with Emily and Elliot. He again sees the French girls and imagines flirting with them, only to be disappointed when he sees the them walk off with teenage boys. The family returns to the park to watch fireworks. Jim gets drunk and Emily gets into an argument with him (after she sees demonic visages on the faces of the teen girls). Ultimately Emily again takes Elliot back to the hotel, leaving Sara and Jim at the park. Jim and Sara go on a ride, where Jim hallucinates an incredibly sexy naked woman who says she will be with Jim soon.

Jim is finally approached by one of the French girls and she asks him to hang out with her. He has a vision of the theme park being destroyed if he accepts, so he declines her offer. She spits in her face. Jim then realizes that Sara is missing and, before he can find her, he is attacked by park employees. He wakes up in a laboratory where he meets a scientist who is watching Jim’s memories of the day. The scientist tells Jim that everything he has seen is in his imagination, and that Jim’s boss is working with them. Jim manages to escape and kills the scientist (who turns out to be an android). He finally finds Sara in the elderly mother’s hotel room  (and also finds she has dressed her son as a princess). The woman claims to have been a former park princess, who was fired after she hugged a girl to death. The woman begins hypnotizing Jim with her necklace, but Sara smashes the necklace and the two flee the room.

On their way to their hotel, Jim says he truly loves Sara. They arrive back in the hotel room and Jim sings Sara to sleep. Jim then goes to the bathroom where he begins vomiting hairballs and blood. He realizes he has the cat flu (it is hinted he contracted it from the French girl who spit on him). Elliot wakes up and Jim asks him to go for help, but Elliot simply closes the bathroom door on Jim and goes back to sleep. When Emily wakes up the next day, she finds Jim dead in the bathroom (and his eyes are now cat’s eyes). Park workers come to dispose of Jim’s corpse and implant a false memory of Elliot and Jim on the Buzz Lightyear ride into Elliot’s head. The workers take Jim’s corpse out of the hotel while Emily sobs.

As the van with Jim’s corpse drives off, a fancy car pulls up. Out of the car steps another version of Jim (who looks like the version of Jim that the scientist claimed was the real Jim). He is joined by his wife (who is the naked woman from Jim’s earlier hallucination) and a daughter. They check into their Disney hotel. 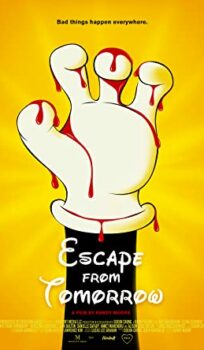