Zoey and Ben (Taylor Russell and Logan Miller)are still traumatized from their experience in the escape room, but they plan to take down the whole Minos organization after tracking their location to Manhattan. They soon find themselves trapped with other survivors from previous escape rooms – Theo, Nate, Rachel, and Brianna – after Minos tricks them into coming together.

Theo (Carlito Olivero)is electrocuted in the first car, while Nate (Thomas Cocquerel) is pulled under sand in another room.

Brianna and Rachel (Indya Moore and Holland Roden)are killed by acid rain before Zoey discovers the games were developed by Amanda (Deborah Ann Woll), believed to have died during the last game but actually survived and is being blackmailed by Minos to design the games because they kidnapped her daughter Sonya. Zoey and Amanda work together to help free Ben, leading to authorities cracking down on Minos and working to bring them down.

On the flight home, Zoey and Ben realize that Minos made it easy for them to get out and that they are still trapped in one of their games, only until Minos decides when to end the game. 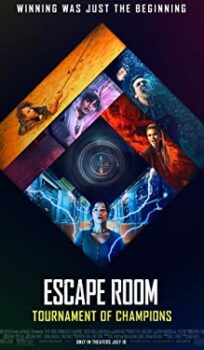