The Eternals are a team of immortal superheroes sent by the Celestial leader Arishem to Earth for the purpose of protecting humanity from the Deviants, a breed of alien predators that target humans. In the present day, leader Ajak (Salma Hayek) is killed by a Deviant named Kro (Bill Skarsgård) that absorbs her energy. She chooses Sersi (Gemma Chan) as her successor, and she joins her former lover Ikaris (Richard Madden), as well as the youngest Eternal, Sprite (Lia McHugh), to round up the other members – Thena, Kingo, Druig, Makkari, Phastos, and Gilgamesh.

Sersi soon learns the true purpose of the Eternals – they were created by Arishem to help bring forth the Emergence, which is the birth of new Celestials after overtaking the intelligent life on other planets. Sersi, as well as most of the other Eternals, have come to love the people of Earth and refuse to go through with the Emergence. However, Ikaris has always been set on seeing the plan go through, so he had Ajak killed and allowed Kro to absorb her energy. Kro also kills Gilgamesh before Sprite joins Ikaris since she has always been in love with him.

The Eternals find that the site of the Emergence will be a volcano where the Celestial Tiamut will rise. Phastos comes up with a plan for Sersi to link with everyone as part of the Uni-Mind, where she can use the combined powers of the Eternals to stop Tiamut. They fight Ikaris and Sprite and subdue them long enough for Sersi to use their combined powers to freeze Tiamut. Ikaris is overcome with guilt and flies himself into the sun. Sersi uses the Uni-Mind to take away Sprite’s immortality so that she may live a normal life among humans.

The Eternals split up again, and Arishem appears to summon Sersi, Kingo, and Phastos after they deviate from his plan, but chooses to spare them for now. Thena, Makkari, and Druig get help from Thanos’s brother, Eros, to help find them and other Eternals. Meanwhile, Sersi’s boyfriend Dane Whitman comes across his family’s sword, the Ebony Blade, and is asked by none other than Blade if he feels he is ready to take up the mantle. 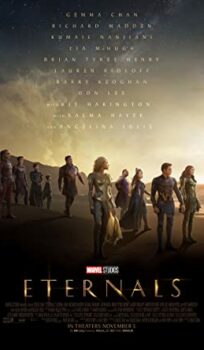