In the late Sixties, Gavin Grey (Dennis Quaid) is bankrupted by his best friend Lawrence (John Goodman), who stole money from Grey’s restaurant to pay off gambling debts. Lawrence is eventually murdered by New Orleans gangsters he’d owed money to.

Gavin hates life outside pro football, and tries to make a big comeback with the Denver Broncos. His comeback fails miserably. Seeing that he can no longer provide for his family, Gavin’s wife Babs takes a job as an assistant to Narvel Blue (Carl Lumbly) who is becoming rich and successful in the fast food business.

The movie jumps ahead, to 1988. Gavin Grey is now old and fat, working as an assistant golf pro at a Louisiana country club, where he spends most of his time drinking and telling boring old stories about his glory days. Meanwhile, Babs (who had always been a demure Southern belle) is still a youthful-looking, attractive, vigorous, successful executive with Narvel Blue’s thriving fast food corporation. He must now live in her shadow, as she long lived in his. 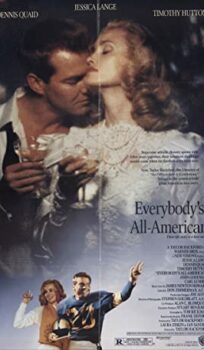