Jamie New (Max Harwood) is a sixteen-year-old who dreams of being a fabulous drag queen. His mother Margaret (Sarah Lancashire) supports him fully but sends Jamie fake notes from his father who in reality does not want to spend any time with Jamie because he is ashamed of him for being gay.

Jamie eventually learns from former drag queen Hugo (Richard E. Grant) how to be a queen and decides to wear a dress to prom, but teacher Miss Hedge (Sharon Horgan) forbids it.

Jamie eventually learns the truth about his father and after a big fight he and Margaret both declare their love for each other. Jamie comes as himself in a dress and eventually the other kids learn to accept him as he is and he is allowed to attend the prom. 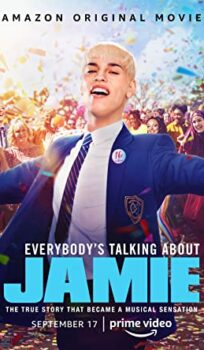