The film begins with the announcement of Evita’s death at a movie theater in Argentina, then shows her state funeral. We see a young Eva at her illegitimate father’s funeral and follow her rise through the ranks of the Argentinian entertainment industry (the movie implies she used her sexuality, as well as her talent, to achieve fame). She meets Colonel Peron at a charity ball for the victims of the 1944 San Juan Earthquake and they fall in love.

While the military sees here only as an opportunistic bitch, she wins the hearts of the Argentinian people and though the movie shows this influence help get Juan Peron released from being imprisoned by his political foes, this is widely regarded as fictional.

When Juan Peron becomes the President of Argentina, the glamorous Eva embarks on “The Rainbow Tour” of surrounding countries and establishes an aid foundation for the Argentinian poor. Though some of the money is siphoned off by corrupt bureaucrats, this foundation does help a lot of people and they begin to call her “Evita”.

She attempts a run for Vice President to her husband, but she is stricken with cervical cancer and dies at age 33. The film ends with Evita lying in state and Che’ (Antonio Banderas), who has played many roles through the film as Evita’s life unfolds, coming up to her glass coffin and kissing it.

The film includes the Academy Award winning song, “You Must Love Me”, that was written especially for the film. 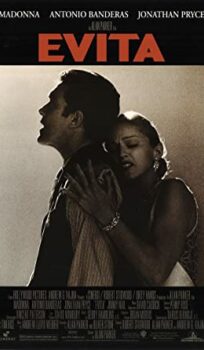