Allegra Geller (Jennifer Jason Leigh) is not a game-designing godess, Ted Pikul (Jude Law) is not really an Antenna Research PR nerd. In fact, everything you see in ‘eXistenZ’ is false. That’s because ‘eXistenZ’ is only the title of the game-within-a-game, the REAL game is called ‘transCendenZ’. Allegra, Ted, Gas and the whole ‘cast’ of eXistenZ are merely game-testers. However, Allegra and Ted REALLY are assassins, sent to kill Yevgeny Nourish (Don McKellar), the REAL game designer, because of the threat he poses to reality. 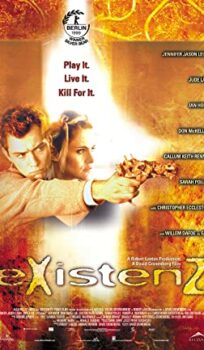