Thierry Guetta ends up making the documentary on street art, but it’s misguided and terrible, causing Banksy to hijack the documentary and turn it’s focus on Guetta himself. (The result is this movie)

Banksy inspires Guetta to make street art himself, eventually becoming a huge sensation in the Los Angeles art field under the psuedonym “Mr. Brainwash”. His first gallery is a huge success, earning almost $1 million in the first week. We learn Guetta continued to have success with his ICONS gallery and eventually did the cover art for Madonna’s greatest hits album. Furthermore, Guetta’s wife picked up his abandoned filmmaking.

Reviewers have suggested that the documentary may in fact be a hoax, with “Brainwash” and “Banksy” being one in the same, yet no official statement has been given to support those claims. 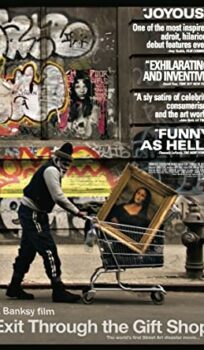