The Expendables are on a mission to rescue a captured billionaire, in the process releasing Trench (Arnold Schwarzenegger), who had been trying to accomplish the same mission when he was captured himself.

Mission completed, they go home for some R&R. However, Church (Bruce Willis) appears and forces Ross (Sylvester Stallone) and his men to take on a new job in payment for double crossing the CIA in the last film. They are to take a woman computer specialist, Maggie (Nan Yu), to Albania, where she will open a high tech safe on board a crashed aircraft and retrieve a small case.

The mission goes well, and they get the case – unfortunately the team are then captured by a local bad guy, Jean-Claude Van Damme. He kills one of them and takes the case, leaving the rest behind.

Maggie tells them that the case was important because it contained the location of tons of weapons grade plutonium left behind by the Soviet Union. The team set out to stop the bad guy and get revenge. The battle some of the gang in a town and are pinned down, but Booker (Chuck Norris) appears to save them before going on his way. They find a local village whose men have been taken to the mine where the plutonium is kept to dig it out and kill some more gang members there.

Then they move on to the mine itself, crashing their plane on the base to get in.But it’s too late and they are buried inside as Van Damme escapes with the plutonium. Trench arrives in a digging machine to rescue them and they chase the bad guys to the airport and have a huge battle.

Ross kills Van Damme in a one-on-one fight, the rest of the gang are shot to pieces by the good guys, and the plutonium is recovered. Church tells Ross they are now even, and gives him a present for his help – a new and even older and more decrepit airplane. 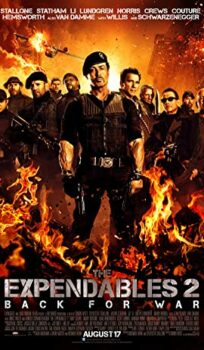