Pooper:
Brad thwarts a robbery, Stacy gets in a happy and chaste relationship with Rat, and Spicoli gains a slight measure of respect for Mr. Hand.

Long Ending:
The movie follows the exploits of various high school students. It generally focuses on Stacy (Jennifer Jason Leigh), who wants to find a good guy to have sex with. She is guided by her friend Linda (Phoebe Cates), who is dating a much older man (and likely embellishes her own sexual exploits).

Stacy first lies about her age and loses her virginity to an adult she meets at the mall, who then never calls her back. Stacy decides to go on a date with a good-natured geek named Rat (Brian Backer). However, Rat is put off by Stacy’s advances as he is very mild mannered. Stacy’s affections then shift to Rat’s best friend Damone (Robert Romanus), who portrays himself as a lady’s man. However, when they have sex, he lasts about 30 seconds. Damone then ignores her as well.

Jeff Spicoli (Sean Penn) is another student who has no greater ambition than getting high and becoming a famous surfer. His lackadasical attitude is challenged by their no-nonsense history teacher, Mr. Hand (Ray Walston). Though Spicoli constantly tries to prank Mr. Hand and disrupt the class, Mr. Hand is too clever and consistently gets the better of him. Spicoli also crashes the car of football star Charles Jefferson (Forest Whitaker), but gets out of trouble by making it look like their rival school’s football team smashed the car (inspiring Charles to destroy the opposing school at the season ending football match).

Things reach a head as the final dance of the school year grows close. Stacy discovers that she was impregnated by Damone and asks him to pay for half of the abortion and give her a ride to the clinic. Although he tries to get the money, he is unable to do so and ditches her. Brad eventually figures out the problem and supports Stacy through the abortion. Linda gets revenge on Damone by spraypainting that he is a prick on his car and on his locker. Damone and Rat also have a falling out after Rat realizes that Damone slept with Stacy behind his back.

The night of the dance arrives and Spicoli is not allowed to attend until Mr. Hand lets him. Spicoli finally demonstrates a bare minimal knowledge of the Constitution and Bill of Rights, so Mr. Hand lets him attend the dance (and Spicoli shows a grudging respect for Mr. Hand). Linda is also crushed when her older boyfriend dumps her on the day of the dance. However, all the kids just decide to forget their problems and enjoy themselves (including Rat and Damone making up). Afterwards, Stacy decides she’d rather have a fulfilling relationship than meaningless sex and asks Rat out on another date. The film ends with Brad finally finding self-respect by foiling a robbery of the convenience store where he now works. Spicoli witnesses the thwarted robbery and calls Brad a legend.

Title cards reveal that Stacy and Rat have been enjoying a passionate and chaste love affair. Linda goes on to date and live with one of her college professors. Mr. Hand thinks all of his students are high after his dealings with Spicoli. Brad gets promoted to manager of the convenience store. And Spicoli gets a huge reward when he saves Brooke Shields’ life during an accident, but then spends all the money on a celebratory party. 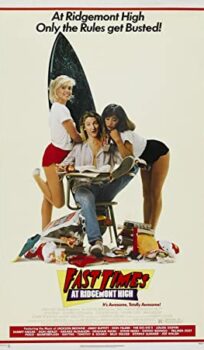