Pooper:
Faust forsakes his youth, asks for forgiveness and is embraced by Gretchen before they are both burned to death. Mephisto believes he has won, but the archangel states that true love invalidated Mephisto’s contract (love conquers all) and the souls of Faust and Gretchen are allowed to ascend to Heaven. Mephisto, meanwhile, is banished back to Hell.

One night, the demon Mephisto (Emil Jannings) journeys across the land with three horsemen of the apocalypse. They are encountered by an archangel who seeks to banish them from the Earth. The two eventually strike a wager. The archangel states that humanity is inherently good and pure and can’t be perverted by evil. The Angel tells Mephisto that if he can capture the soul of Faust (Gösta Ekman), then he may claim dominion over the Earth.

Faust lives in a tiny village and is a very old sage and alchemist, obviously one of the town’s leaders. Mephisto descends upon the town and begins spreading the plague throughout. Panic is widespread, and Faust works tirelessly to find a cure. He is unsuccessful, and both his good friend and the local priest are killed by the plague/Mephisto. In a fit of despair, Faust begins destroying his equipment and burning his books, including the bible. Faust then notices that one of his books has instructions for summoning the prince of darkness.

Faust follows the instructions and summons Mephisto. Although Faust is initially horrified at what he is done, Mephisto eventually gets him to agree to a 24-hour “trial period” where Mephisto will imbue Faust with unlimited power. If Faust wants to retain his power at the end of the “trial period,” he must pledge his soul to Mephisto. After this deal is struck, Faust begins healing the sick. He is unable, however, to heal anyone wearing a cross, and the town begins stoning him as a servant of Satan.

Faust is about to turn Mephisto away, but Mephisto reminds him that the trial period is still in effect. Mephisto then offers to restore Faust’s youth and provide him with the love of a beautiful duchess (and will also remain Faust’s servant throughout the duration of his life). Faust is persuaded and has his youth restored to him. Mephisto then flies Faust to the duchess who is about to get married to another man. Mephisto presents the engaged royal couple with a flower that hypnotizes the Duchess and blinds the rest of the wedding party. This allows Faust to escape with the Duchess (who is now wholly in his power) while Mephisto slays her fiancee. Faust brings the Duchess to his bedroom in an estate Mephisto has provided for him and as they are about to engage in love-making, Mephisto appears. Mepthisto notes that the “trial period” is over, and Faust  eagerly agrees to retain his youth and Mephisto’s services  in exchange for his soul.

Mephisto performs admirably, using many tricks to allow Faust to woo the innocent Gretchen. This culminates with Faust making his way into her bedroom one night, and she succumbs to his advances. Seeing this as a chance to make Faust leave this town forever, Mephisto sets a series of tragic events in motion. First, he alerts Gretchen’s brother that Faust is in her room. Then, he wakes up Gretchen’s mother and leads her to Gretchen’s room. Gretchen’s mother catches the young lovers in the act and dies of shock. Her brother shows up moments later and begins fighting Faust. Mephisto covertly kills the brother during the battle, and then arouses the townsfolk by yelling murder through the streets. Terrified that he will be arrested and killed, Faust finds Mephisto and flees back to his estate.

Things don’t go well for Gretchen. With his dying breath, her brother reveals she was impure and was sleeping with Faust. With her brother and mother dead and her reputation ruined, Gretchen is cast to the streets and scorned. Gretchen is also pregnant, and gives birth to her and Faust’s child. During winter, however, she and her baby are without shelter, food, or warmth, and the townspeople refuse to protect her. During a blizzard, Gretchen dreams that she stumbles upon a crib and warm candles, but has instead collapsed in a snow-drift where her child dies. She is found near death by some soldiers, who assume that she has killed her child and drag her back to town. She screams out to Faust in anguish.

Faust, brooding alone at his estate, suddenly feels that Gretchen is in danger. He summons Mephisto and demands they return to his hometown. When they arrive, they find that Gretchen is about to be burned on a stake for her “crime.”

Faust curses his youth and wishes he had never made the deal with the devil. As he runs off to save Gretchen, Mephisto “follows” Faust’s wishes and restores Faust to his actual age. Mephisto knows that this will prevent Faust from rescuing Gretchen, and also prevent Gretchen from recognizing her love. Old Faust throws himself at Gretchen’s feet and begs for forgiveness for his sins, but he is ignored. Gretchen is tied to the stake and lit on fire. Faust then throws himself on the fire as well and grabs Gretchen’s hands. This time, she recognizes the old man as Faust and the two embrace lovingly as they are consumed.

Mephisto begins rejoicing, believing he has won Faust’s soul and, thus, the Earth. The archangel appears and tells Mephisto that he has actually lost. In the end, Faust gave up everything in the name of love, and love is the most powerful force of all. Faust’s embrace of love negates Mephisto’s contract. In other words, love conquers all. Mephisto is furious as he watches his contract disintegrate, and is then banished by the archangel while the souls of Gretchen and Faust rise up, hand-in-hand, to Heaven. 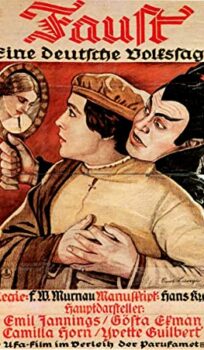