Pooper:
Although Kate and Simon are killed, Sam is seemingly freed from the witch’s curse. However, the witch possesses Sam after she survives the witch’s attempts to murder her. The film ends with Deena and Josh vowing to free Sam’s soul with the help of a prior survivor of the witch’s curse, a woman named C. Berman.

Long Ending:
The movie opens in 1994 in a town called Shadyside. Two teens – Ryan (David W. Thompson) and Heather (Maya Hawke) are closing down the mall stores they work at for the night. Heather is suddenly attacked by a man in a skull mask (Noah Bain Garret) who also killed seven other mall employees. After a long struggle, Heather is fatally stabbed. Before she dies, she pulls off the mask to find Ryan underneath. He has seemingly been possessed by Sarah Fier (Elizabeth Scopel), a witch who was killed in Shadyside hundreds of years ago and possesses people to wreak her vengeance.

We learn that Shadyside is a poor town with a long history of serial killers and that the Skull Mask Killer is just the newest one. Other serial killers over the decades included the Camp Nightwing Killer (Lloyd Pitts), Ruby Lane (Jordyn DiNatale), the Milkman, Billy Barker, the Shame Killer, and The Pastor (who killed children and carved their eyes out). The town is located right next to one of America’s wealthiest and most prosperous cities – Sunnyvale. The residents of each town despise each other.

Three Shadyside friends, Deena (Kiana Madeira), Kate (Julia Rehwald), and Simon (Fred Hechinger) are poor and dream of moving out of Shadyside. Deena is particularly depressed as her ex-girlfriend Sam (Olivia Scott Welch) moved to Sunnyvale and is dating an asshole jock named Peter in order to hide her homosexuality. At a candlelight vigil for Hannah and the other Skull Mask Killer victims, a fight breaks out between the Shadyside and Sunnyvale teens. The fight continues as the teens drive off and the car that Sam is in gets run off the road. As Sam stumbles out of the wreck, her blood drops on the grave of Sarah Fier. Sam sees visions of the witch before passing out and being taken to the hospital.

Later that night, a person dressed as the Skull Mask Killer harasses Deena, Kate, and Simon. Assuming it’s Peter, they go to confront Sam about her boyfriend at the hospital. They bring along Deena’s younger brother Josh (Benjamin Flores, Jr.), who is obsessed with Shadyside’s deadly history and has a crush on Kate. At the hospital, Peter and three others are killed by the Skull Mask Killer, who then pursues the heroes. Deena and Sam manage to rip off the Skull Mask Killer’s mask to reveal a zombified Ryan is underneath. Meanwhile, Simon is attacked by Ruby Lane, who was killed in the 1960s. Josh realizes that they are dealing with supernatural forces and theorizes that they need to re-bury the witch’s bones that Sam disturbed to break the curse. The teens do so, but it has no effect as they are soon attacked by the Camp Nightwing Killer who was killed in the 1970s. Josh realizes the killers sent by Fiers are attracted to Sam’s blood and they decide to use her blood to lure the three killers into a trap at their school.

At the school, the kids split up. As they await their foes, Deena and Sam reconcile and hook up, Josh and Kate kiss, and Simon masturbates. The three killers follow them to the school and the kids manage to blow them up. Their victory is short-lived as the killers begin reforming despite only their blood and guts remaining after the blast. The teens review news articles concerning the past murders and find that there was one woman named C. Berman who survived the attack by the Camp Nightwing Killer in the 1970s. They try to call her for help but she doesn’t answer. After reading the articles further, they learn that Berman died during the attacks but was resuscitated. They decide to try and do the same with Sam to break the curse.

The teens go to a pharmacy and plan to have Sam overdose on pills before resuscitating her with epi pins. Josh, Kate and Simon stand watch for the killers as Deena helps Sam ingest the pills. The killers attack and kill Kate and Simon. The pills are lost during the attack and Deena is forced to drown Sam. As soon as Sam dies, the killers disappear. Deena performs CPR and brings Sam to life. The police arrive and the surviving kids lie about what happened. Sheriff Goode (Ashley Zukerman), who appears to know that there are supernatural forces involved, ends up publicly pinning the deaths on Simon and Kate.

Deena and Sam officially resume dating. Sometime later, Sam and Deena are hooking up when the phone rings. Deena answers and it is C. Berman (Gillian Jacobs). Berman tells Deena that the witch can never be beaten and will simply change the rules to get her vengeance. Deena is suddenly stabbed by a possessed Sam. The teens struggle and Deena manages to tie Sam up. The film ends with C. Berman about to tell Deena and Josh how she survived the Camp Nightwing Killer and the teens vowing to free Sam from Sarah Fier’s possession. 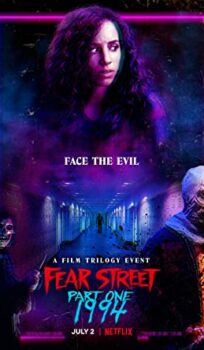