The movie is very loosely based on the life and legend of WuShu master Huo Yuanjia (Jet Li).

He begins life as a selfish, though generally kind-hearted leader of a tiny village. After killing a revered elder/martial arts master in town during a drunken brawl, the elder’s family responds by killing Yuanjia’s little daughter and his mother.

Yuanjia travels China in agony, until he arrives at a small rice-farming town and regains his humanity and finds love in with a blind farmer Moon (Betty Sun). In order to bring honor back to his family as well as to the nation of China which had been humiliated and dominated by the great militaries of Europe, Japan and the USA.

He gains notoriety by defeating an American Wrestling champion (and saving the wrestler’s life when he is almost impaled on some exposed nails hanging from the mat). Yuanjia then goes on to found the seminal martial arts school, the Jingwu Federation (which still exists today as the Chin Woo Athletic Association). Finally, he is challenged to enter a competition where he faces the champion fighters of four dominant nations. Yuanjia’s tea is poisoned during the match, but he still manages to beat three of the four competitors. The final competitor disobeys his bosses and forfeits the match when Yuanjia holds back from delivering a  fatal blow to him.

Upon his death, Moon sees his glowing white image practicing WuShu against the starry sky. 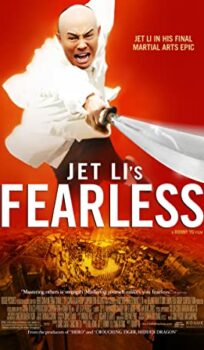