“I’m a huge fan of zombie flicks, but this one was the first zombie movie that not only had blood, gore, and comedy, but a warm, happy ending that really tugs at your heart-strings.”

The Robinsons live in a town where zombies are used as slaves via a neuron-control collar made by a corporation named ZomCon.  Timmy Robinson (K’Sun Ray) is deprived of attention from his parents, and doesn’t have many friends.  He eventually develops a friendship and bond with his family’s zombie, whom he names Fido (Billy Connolly).  However, the collar malfunctions on some occasions, and Fido ends up killing some people in the town, and causing a small zombie uprising.  Fido, however, never harms Timmy, malfunction or not, showing that zombies have retained some ability to reason things out and form emotional attachments.

Mr. Bottoms (Henry Czerny), the head of security, figures out that it was Fido, and has him taken away to the ZomCon headquarters.  Timmy is really upset, and convinces his neighbor Mr. Theopolis (Tim Blake Nelson) to sneak him in.  Mr. Theopolis use to work for ZomCon but because he had formed a sexual relationship with his female zombie Tammy (Sonja Bennet), he was let go.  Mr. Theopolis sneaks in Timmy, causing a mild riot at the gates but un-hooking someone’s zombie, and Timmy sneaks into the boiler room where Fido is working.  However, Mr. Bottoms grabs him and decides to drag Timmy out into the wild zone and leave him there (the wild zone is an unprotected part of the world between towns where zombies are everywhere).

Timmy’s parents, Bill (Dylan Baker) and Helen (Carrie-Anne Moss), rush to ZomCon to rescue Timmy.  Bill, who was always afraid of zombies and has been a rather aloof father, decides to do one positive thing as a father and rushes in to save Timmy.  He frees Fido, and together, they find Mr. Bottoms and in the ensuing ruckus, Bill gets shot, but not before the other zombies from the wild zone break in.  Helen releases Fido from his collar, and Fido kills Mr. Bottom.  They escape together as the zombies tear into the facility and everyone in it.

In the end, the zombie outbreak was contained, and the media covers up all the details and makes Mr. Bottoms look like a hero.  Fido ends up living with the family.  Bill is decapitated and buried (as he always wanted).  Mr. Theopolis realizes that he loves Tammy and ends up treating her like a real wife.  Zombie Mr. Bottoms becomes a slave to his wife and daughter, whom he always mistreated.  Helen has a baby (from Bill) who Fido plays with in a friendly manner, and the movie ends. 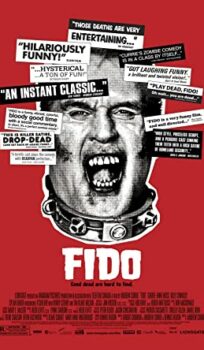