Pooper:
Gi-Joon finds Ji-Woo’s first love (who she met while traveling in India years before) for her (after an exhaustive search and a few bumps) and she finally resolves her feelings.  During the search Gi-Joon and Ji-Woo fall in love.  During the end credits we learn that the two of them met briefly in the airport when they were younger.

Longer version:
Ji-Woo Seo (Su-jeong Lim) is a stage manager for a theater company.  She is still hung up on her first love who she met while traveling in India.  The handsome navy officer Col. Seo who she has been seeing for a little while proposes to her before he has to leave, but she turns him down, remembering India.

Meanwhile, Gi-Joon Han (Yoo Gong) works at a travel agency.  While others in his office are selling customers on the delights of travel, we first see Gi-Joon warning travelers over the phone about kidnapping and tsunami risks.  His boss calls him into his office and gets after him for scaring away the clients.  He tells him not to worry the customers unnecessarily and sends him on a tour group which he doesn’t like and eventually Gi-Joon quits.

Next we see Ji-Woo’s dad arrive home.  He asked what happened with Col. Seo and Ji-Woo says she doesn’t think it’s going to work.  He picks up her jacket and, unknown to Ji-Woo the colonel put the engagement ring in her pocket, it falls out.  Ji-Woo’s dad and sister get excited but Ji-Woo is not, telling them she won’t marry Col. Seo.

At Gi-Joon’s house his brother-in-law (Seung-su Ryu) asks him to get his niece to the school bus as he goes to research for his next novel.  The niece asks Gi-Joon when he’s going to work as he’s cleaning up some shelves.  His sister then hears that he’s not going to work and goes after him — hitting him for being an idiot and quitting his job — and he desperately declares that he’s going to start a business.

Then we see Gi-Joon meeting with a woman from his college class.  She says a bunch of complimentary things — that it’ll be great to help him with his business, etc.  She steps out for a moment and he’s approached by the police who are there to arrest her… because she’s been conning the men in their college class.  In the course of getting info about her, the men of the class start arguing about who loves her, one declaring that she was his first love so clearly he’s the one who loves her most.  As Gi-Joon listens to this argument he decides to start an agency to find people’s first loves.

Ji-Woo’s dad decides to hire Gi-Joon for the job.  Ji-Woo gives Gi-Joon her first love’s name — Kim Jong-Wook and the times they were traveling together.  With so little info, Gi-Joon and Ji-Woo meet many different men with the name (with some comic results including a funny adventure in the woods).  While they search, Ji-Woo tells Gi-Joon about Jong-Wook and her memories of the relationship (and Jong-Wook looks like Gi-Joon in them**).  In addition, one of the stars of the show Ji-Woo is stage managing hurts herself and Ji-Woo performs in her place, doing very well (and Gi-Joon goes to see it because he likes her.)

The two start to develop feelings for each other and, at a certain point, Ji-Woo reveals that she doesn’t like things to end (example: she never eats the last sweet when she buys sweets) which leads Gi-Joon to discover that Ji-Woo had Kim Jong-Wook’s ID card all this time.  She was supposed to meet up with him as they were returning to Korea but never did.  She’s spent years with the relationship in limbo — not finished because she was afraid that they’d eventually break up/something bad would happen.

With the ID Gi-Joon can easily find the man and receives a phone call from him asking for Ji-Woo.  Although Gi-Joon is now in love with Ji-Woo he gives her the info and tells her to finish it — meet him again and be in love with Jong-Wook — rather than leaving herself in limbo.  She goes and Gi-Joon goes to the travel agency wanting to see India — telling the travel agent that he wants to see India to see it the way the woman he loves sees it.

Ji-Woo does go to see Jong-Wook.  He’s not the same guy from the memories!**  Ji-Woo decides she’s not in love with him.  Gi-Joon has come to the airport and sees part of the meeting, having realized he loves her and been driven there by his brother-in-law.  Ji-Woo comes out of the airport and they finally acknowledge their feelings for each other and kiss.

During the credits, we see a flashback to when Ji-Woo returned from India.  She trades in her ticket for a later flight (the reason she missed meeting up with Jong-Wook – which she always attributes to rain) and Gi-Joon trading in a ticket/getting hers to go see his “first love” too.  They have a short exchange with each other.

**My theory as to why Gi-Joon is the one who appears in Ji-Woo’s memories is that he wishes it was him because he’s falling in love with her/loves her and so the “memories” are his imagination of her memories as if he’d been Jong-Wook. 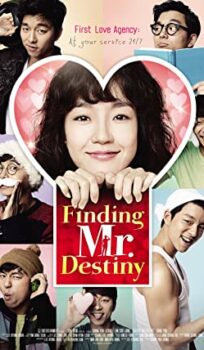