Pooper:
Darkwolf overcomes Nekron’s telekinesis and slays him, with Nekron’s mother dying when the ice fortress collapses. Larn rescues Princess Teegra, and the two finally kiss, with Teegra promising to preside over a new kingdom without violence.

Long Ending:
Juliana, a powerful sorceress, gives birth to Nekron, an even more powerful being. Nekron is blessed with telekinesis (ability to move objects with his mind) and control over ice. He uses his vast powers and his army of sub-humans to dominate the world, destroying all opposition until only one kingdom remains. The kingdom is ruled by King Jaro along with his son Taro and daughter Teegra. Their kingdom is located within a volcano that, to this point, has kept Nekron and his forces at bay.

Juliana sends a delegation to negotiate a truce between the kingdoms, but the secret goal is for the sub-humans to capture Teegra and bring her to the ice kingdom. King Jaro and Taro reject the truce and foil an assassination plot, but are unable to stop the sub-humans from capturing Teegra and escaping with her. Nonetheless, Teegra is resourceful and manages to escape from the sub-humans. In the swamps, she eventually meets Larn, the only surviving warrior from a town that was destroyed by Nekron and his subhumans. The two fall in love and start the journey back to King Jaro’s realm, but Teegra is recaptured by the sub-humans after Larn is almost killed by a giant octopus.

Larn is revived by Darkwolf – King Jaro’s brave and powerful military commander. The two set off to rescue Teegra, not knowing she has already escaped again when the sub-humans were drunk. Teegra is then captured by a sorceress who decides to try and sell her back to the sub-humans. Instead, the sorceress is killed by them and Teegra recaptured, this time for good. The sorceresses’ ghost, however, tells Larn that Teegra has been taken to Nekron’s ice kingdom, and he and Darkwolf split up, with Larn journeying to a port city to find passage to the ice kingdom.

Once he arrives in the port, Larn overhears Taro stating that he is launching a rescue mission (disguised as a diplomatic mission) to the ice kingdom. Larn stows away on Taro’s ship. Meanwhile, Teegra agrees to marry Nekron if it will bring peace to the kingdoms, but Nekron rejects her, saying that he loves war and finds Teegra disgusting. She is thrown into an ice pit to die. When Taro arrives, he and his delegation attempt to negotiate with Nekron who, of course, rejects their pleas. Taro and his men attack Nekron, but Nekron uses his telekinetic powers to force Taro to kill his delegation and himself. Larn then launches a sneak attack and manages to wound Nekron before he too is beaten by Nekron’s telekinesis. Ultimately, Larn is rescued by Darkwolf after he is hunted  by the sub-humans in the icy tundra and the two return to the fire kingdom. Nekron meanwhile, builds a giant ice fortress to launch a final attack on the fire kingdom.

Darkwolf and Larn lead an attack on the ice fortress while flying on pterodactyls. They are the only two who successfully penetrate the fortress’ defenses. Larn runs off to rescue Teegra and Darkwolf takes on Nekron. Darkwolf is almost defeated, but finally manages to overcome Nekron’s telekinetic powers (through his sheer force of will) and kills him. Meanwhile, King Jaro releases a wave of lava from the volcano that causes the ice fortress to crumble, killing Juliana.

Larn and Teegra escape just in time and kiss. Larn sees a wounded sub-human and goes to kill him, but Teegra stops him, saying they need to eliminate violence in the world, now that the fire kingdom reigns supreme. We find out that Darkwolf also survived, and Larn and Teegra return to the fire kingdom, ready to help build a peaceful  and non-violent (but still largely naked) future. 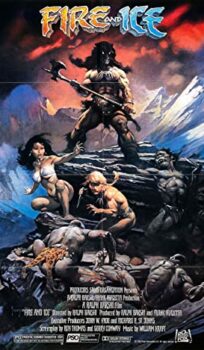