After witnessing David Hagan (Vincent D’Onofrio) murder a convenience store owner and his son, firefighter Jeremy Coleman (Josh Duhamel) is forced to go into witness protection. Days before trial, an attempt is made on his life and that of his lover U.S Marshal Talia Durham (Rosario Dawson) by Hagan’s assassin Robert (Julian McMahon).

Fearing for her safety, Coleman decides to take Hagan out once and for all. He sets a fire trap at Hagan’s base of operation, intending to burn him and his men to death. However, Talia has been kidnapped by that time, so Coleman must save her too. He sets her free before getting into an altercation with Hagan. Talia kills the escaping Robert for trying to murder her earlier. Hagan seems to have the upper hand with his fight with Coleman, but Coleman throws an axe into his chest. Hagan is still able to fire though and when he points his gun at Coleman, Talia shows up and shoots him several times then ignites a propane tank, setting Hagan ablaze and out the building to his death. Talia and Coleman then escape the burning building.

The last scene is Lt. Mike Cella (Bruce Willis) packing up the Hagan case file and noting that all the evidence burned up with the fire. He knows that Coleman was behind it all but decides to stay silent as he was able to bring Hagan to justice. With Hagan dead, there is no need for a trial or Coleman to remain in witness protection. Coleman can go back to his life and be with Talia. 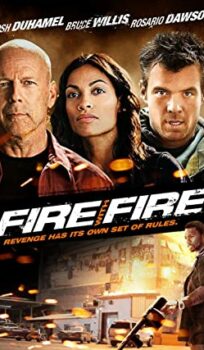