POOPER
On July 20, 1969, Neil Armstrong and Edwin “Buzz” Aldrin become the first men to walk on the moon. Just before they take off back for home, Neil leaves behind the bracelet that belonged to his 2-year-old daughter Karen, who died years earlier.

LONG VERSION
In 1961, test pilot/engineer Neil Armstrong (Ryan Gosling) is flying an experimental rocket aircraft that bounces off the atmosphere when attempting to return to Earth. Neil is able to safely land the plane, but his colleagues believe this is just the latest in a string of mishaps caused by him being distracted by something. That distraction is the treatment his 2-year-old daughter Karen is receiving for a brain tumor. She later dies of the tumor, and Neil keeps a bracelet she wore in his work desk. Still grief-stricken, Neil applies to NASA to be a part of the upcoming Project Gemini, the precursor to the Apollo missions that will eventually place a man on the moon. He is accepted, and he and his wife Janet (Claire Foy) and son Rick move to Houston. The Armstrongs soon befriend their neighbors/fellow astronauts Elliot See (Patrick Fugit) and Ed White (Jason Clarke). Soon after, Neil and Janet have another son, Mark.

It’s now 1965, and Neil and the other astronauts are given their assignments for the Gemini missions. Ed will be on Gemini 4 (and complete America’s first space walk), Neil on Gemini 8, and Elliot on Gemini 9. As Neil is preparing for his flight, he learns that Elliot and his Gemini 9 pilot, Charles Bassett, were killed in a plane crash. After launching, Neil and his pilot Dave Scott (Christopher Abbott) are attempting to dock Gemini 8 onto the Agena Target Vehicle. After successfully docking, the spacecraft begins to roll at a potentially lethal rate. They undock from Agena, and Dave soon blacks out due to the roll. Just before Neil can lose consciousness, he activates thrusters that stops the roll, but also automatically aborts the mission. Neil and Dave face media scrutiny for their actions on Gemini 8, but they are quickly exonerated by NASA since the problem was a mechanical failure and not pilot error.

As Project Gemini is wrapping up, Ed learns he has been selected to join astronauts Gus Grissom (Shea Whigham) and Roger Chaffee (Cory Michael Smith) as part of the crew for Apollo 1. On January 27, 1967, the trio are running a test in the command module of Apollo 1 when a fire breaks out on board. The fire quickly kills Ed and the others, and the Apollo program is suspended. Neil, who never got over the death of his daughter, has now lost two friends in a short amount of time, and the quiet and distant Neil becomes even more distant, especially to his family, by further burying himself in his work. A year later, Apollo is restarted, and Neil is flying the Lunar Lander Research Vehicle. It malfunctions and crashes, but Neil is able to eject from the craft in time. NASA is angry that Neil destroyed the LLRV, but he says that it’s important to fail on the ground rather than fail in space. Despite the accident, Neil is still given an Apollo assignment. He’ll be the commander of Apollo 11, flying with Edwin “Buzz” Aldrin (Corey Stoll) and Michael Collins (Lukas Haas). He’s also told that if everything goes as scheduled with the other Apollo missions, this will be the first one to land on the moon.

As the launch of Apollo 11 approaches, Neil becomes even more distant to his family, and Janet has had enough. She confronts Neil about the possibility that he might not survive the mission, and he needs to let his sons know that, just like Elliot and Ed, they might not see their father again. He sits them down and explains the risks of the mission and the fact that he might not return to them, and the boys hug their father and say goodbye to him. Neil kisses Janet goodbye the next morning and he heads off to Cape Kennedy for the launch. The day before the launch, Neil, Buzz, and Michael face the media, where Buzz mentions that he’ll be bringing some personal items with him to the moon, but Neil doesn’t say what he’ll be bringing. On July 16, 1969, Apollo 11 successfully launches from Cape Kennedy, and four days later reaches the moon. With Michael staying behind in the command module, Neil and Buzz enter the lunar module, named Eagle, and descend to the lunar surface. After missing their initial landing site and nearly running out of fuel, Neil safely lands the Eagle on the moon.

Neil opens the hatch and climbs down the ladder to the surface of the moon. Right after he steps on the surface, he says the famous line “that’s one small step for man, one giant leap for mankind”. So on July 20, 1969, Neil Armstrong becomes the first human being to walk on the moon, joined by Edwin “Buzz” Aldrin a few minutes later. Over the next few hours, Neil and Buzz conduct various experiments and collect moon rocks. Just before they are supposed to leave, Neil walks over to a nearby crater, and pulls out Karen’s bracelet. He drops it into the crater, then gets back on the Eagle and they take off back for home. Now back on Earth, the astronauts are in quarantine but are able to receive visitors. The movie ends with President John Kennedy’s “We Choose To Go To The Moon” speech playing in the background while Neil and Janet share a quiet moment together. 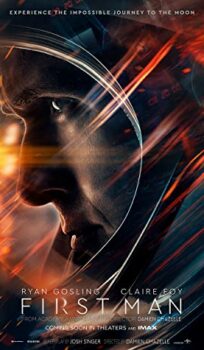