Based on a novel by H.G. Wells

POOPER:
Arnold and Kate make it back to Earth, but Cavor stays behind on the moon.  Decades later, astronauts discover the abandoned Selenite city, and Arnold speculates that the Selenites were killed off due to not having an immunity to Cavor’s germs.

LONG VERSION:
Man has landed on the moon for the first time, but the astronauts are shocked to find a Union Jack flag on the lunar surface and a proclamation claiming the moon in the name of Queen Victoria.  The proclamation is written by Katherine Callender, and the United Nations seeks her out.  They find she has died years earlier, but her husband Arnold Bedford is living in a retirement home in England.  With the UN representatives questioning him, the story flashes back to 1899.

Arnold (Edward Judd) and Kate (Martha Hyer) are an engaged couple living next door to eccentric inventor Joseph Cavor (Lionel Jeffries). Cavor has invented a substance called Cavorite, which allows anything it is applied to or made out of defy gravity.  Cavor has built a vessel covered in Cavorite that he plans on taking to the moon.  Arnold agrees to go with, but Kate thinks they are both crazy.  At the time of the launch, Kate is accidentally brought on board as the vessel lifts off and eventually lands on the moon.  Arnold and Cavor put on diving suits they brought along (Kate must stay behind or she will die on the surface) and investigate.  At this time, they plant the Union Jack flag and leave behind the proclamation that Kate had written after they landed.  They later fall down a vertical shaft leading into the moon and discover an insect-like race of beings that Cavor dubs Selenites (named after Selene, the Greek goddess of the moon).  They make it back to the surface, only to find that the Selenites have taken the ship and Kate into their underground city.

The duo make their way into the city and, after realizing that it has a breathable atmosphere, take off their diving suits.  Arnold and Cavor investigate the city and soon find Kate.  After surviving an attack by a “moon bull” (a large caterpillar), they find their ship, but are also captured by the Selenites.  When the Selenites were holding Kate, they were able to use her pleading to be let out to learn English.  Cavor is able to communicate with the Grand Lunar (the head Selenite) and he thinks they want to share technology.  Arnold quickly figures out that the Selenites have no intention of letting the trio leave and want to use Cavorite to allow them to attack the Earth.  Arnold and Kate are able to escape the Selenites and get back to the ship, but Cavor chooses to stay behind.  Arnold and Kate launch the ship and fly out of the city through the vertical shaft they found earlier and make it back to Earth.

Back in the present day, Arnold tells the UN reps that the ship landed in the ocean and sank, but he and Kate were able to get out and swim to shore.  They never saw or heard from Cavor ever again.  With everyone now watching the moon landing on television, the astronauts discover the underground city.  They find the city abandoned and falling apart, with no signs of life anywhere.  The movie ends with Arnold remembering that Cavor had a cold during their adventure and the Selenites had to have died out because of they had no immunity to his germs. 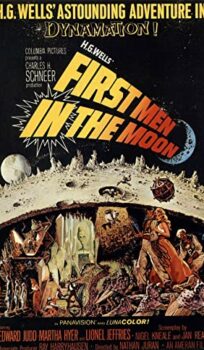