Joe (Daniel Craig) is a has been actor who seemed to have great success at one time but now just spends his time drinking, doing drugs and sleeping with random women – the only person he has in his life is his personal assistant Ophelia (Eve), who puts on surgical gloves before she enters his house, and is getting tired of him.  He receives a call from his mother to say his childhood best friend Boots, whom he has not seen in years, has died.  He then go to a disastrous meeting with his agent  who has no interest in Joe and an up and coming director, during which his excessive drinking, cause him to lose the part he wants and for his agent to tell him he is washed up, no one wants to work with him, and tell him to find another agent.  This caused him to go for a drunken swim and have a flashback of his teenage years and his best friend.

The film flashes back to 25 years earlier when a 15/16 years old Joe and his best friend Boots are very close.  We find out Boots has epilepsy and has a recent attack in the cinema.  Joe’s next bored door neighbor and housewife, Evelyn, comes on to him and invites him over that evening – they are almost caught by her unsuspecting husband.  The next day Joe meets up with a popular but quirky girl his own age from town, Ruth, and she invites him back to her house.  They find out how much they have in common and arrange to meet the next day.  On his way to his date, Evelyn coaxes Joe to call in to her and they end up sleeping together – he arrives late to meet Ruth, who has been kept company by Boots, with love bites from Evelyn all over his neck – she storms off and in frustration he and Boots have a fight.  The next day, all alone Evelyn comes on to Joe again and they both go to her house, where she proceeds to force her little girl Jane, who was watching the tv, out to play so they can have the house to themselves.  While Joe and Evelyn are in bed, Jane finds an old sea mine on the beach and gets blown up and dies – Joe who blames himself, runs away and has not been home since.

We flash-forward to the present day, where Joe has managed to not drown in the sea and goes back to England to attend Boots funeral , which he is 3 days late for and has missed.  His mother and Aunt tell him that Boots died of an aneurism and has left behind his wife Ruth, 4 young children and a lot of debt.  Joe goes to visit Ruth at the graveyard who tells him how much she loved Boots and what a wonderful person he was, but how she cannot cry even though it is the saddest moment of her life.  His sister tells him that Evelyn also died a few years ago – her marriage broke up after Jane died and he married a cruel man to punish herself, who beat her and when she found the courage to leave him, the car she was driving in broke down and when she got out to look at it, was knocked down and killed by a truck.

Joe goes back home to the very big house he has bought his family and listened to the same music he and Ruth listened to the night they met and writes her a cheque to help her out which is sister gives to her, and Ruth breaks down crying.

Joe heads back to LA and is met by his PA with whom he seems proceeds to have a proper genuine conversation. 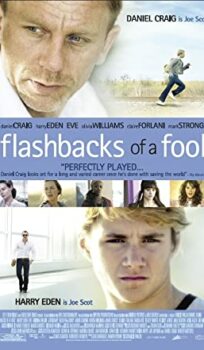