Based on a true story.   It is 1944. Florence (Meryl Streep) is very rich and supports orchestras and private music societies like the Verdi Society in New York City.  She performs at private concerts,  encouraged by her husband St. Clair Bayfield, and her friends, who benefit from her fortune, praise her singing which is awful. Her husband bribes music critics to write good reviews and blocks critics who would write the truth.

Florence is in poor health,  she got syphilis from her first husband at age 18, and she and St. Clair abstain, while he has a girlfriend and lives in  another apartment.

Florence gets a new pianist to accompany her,  Cosme McMoon (Simon Helberg). She makes a record and gives to all the members of the Verdi Society. She rents out Carnegie Hall and performs in front of a sold out house, including 1,000 rowdy military.

Florence always carries a briefcase with her that Cosme was told to never ask about.  Her will is in the briefcase,  and just before the concert she adds a hand written addition giving Cosme a bequest,  and it’s witnessed by the house manager.

The concert starts,  and some of the audience starts to laugh, but her friends including a former showgirl and a playwright and his friends and Cole Porter! get everyone cheering. There is a critic who will not be bribed who writes a brutally negative review  that Florence reads and she  realizes the truth. She becomes very ill and dies the next week, with her loyal husband at her side,  telling her how much she has meant to so many people.

Credits show photos of the real Florence Foster Jenkins while her real recording plays, and share true facts:  Her record has never been out of print!  The program of her performance is the most requested from the Carnegie Hall archives. 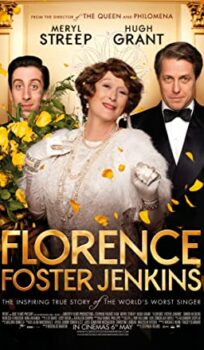