Weebo video records a heartbroken Philip (Robin Williams) telling her how the reason he is so absent minded is because he loves Sara (Marcia Gay Harden) so much. Realizing that she needs to stop trying to come between him and Sara, Weebo goes to Sara’s house and plays the recording to her. Sara goes to Philip’s house right away, and the two of them kiss. Sara also finally gets to see how the Flubber works when Philip takes her out in his Flubber-powered flying car.

However, when they get home, they find Hoenicker (Raymond J. Barry), his son Bennett (Wil Wheaton), and his henchmen Smith (Clancy Brown) and Wesson (Ted Levine) waiting for them in their garage. He demands for Philip to sell him the Flubber in exchange for forgetting the loan that the college owes him, but Philip refuses. The next day, when Philip and Sara leave town to sell the idea of the flying car to the Ford company, Smith and Wesson break into Philip’s home to steal the Flubber. Weebo tries to stop them, but they severely damage her and leave with the Flubber. Philip and Sara return home soon after, and Philip finds the broken Weebo. She gives him the blueprints for her daughter Weebette before she shuts down for good.

After that, Philip and Sara head to Hoenicker’s mansion, ostensibly to make a deal with him on the Flubber, but really to take it back by force. While they are there, it is revealed that Philip’s rival Wilson (Christopher McDonald) is partners with Hoenicker. Using the purloined Flubber and some Flubber they secretly brought with them, Philip and Sara defeat Hoenicker, Wilson, and the others.

The college is saved due to the Flubber, and Philip finally weds Sara, albeit through the newly-constructed Weebette’s video screen. Philip and Sara are last shown riding off in their flying car for their honeymoon, along with Weebette and the Flubber. 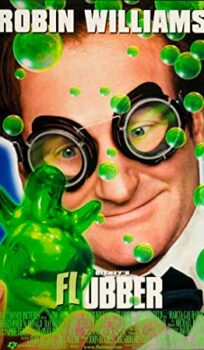