Dr. Frankenstein (Leonard Whiting) brings to life a perfect, handsome Creature (Michael Sarrazin). At first he’s a prettyboy hit in high society but gradually begins to exhibit split personality – part Creature, part Dr Clerval (the brain donor). Worse, the perfect body begins to degenerate, causing a disgusted Frankenstein to lock him away where no one can see him.

The Creature is crushed by it’s “father’s” rejection and, discovering its own growing ugliness, runs off and is presumably killed in a fall from a cliff.

Frankenstein believes the Monster to be dead but later finds him in the thrall of wicked Dr. Polidori (James Mason), who uses the Creature to blackmail Frankenstein into helping him create a female. They succeed and Polidori attempts to burn the Creature to death. He escapes, crashes a party and rips the head off of the vicious female Creature. Havoc ensues.

Frankenstein, his wife Elizabeth and Polidori flee to America on a ship. They discover too late that the Creature has stowed away on board. The Creature gleefully kills Polidori and Frankenstein is knocked unconscious. Creature then chases the crew overboard and steers the ship due north toward the Arctic. Elizabeth pisses off the Creature one time too many and the Clerval part of his mind strangles her (the two never got along anyway). Frankenstein wakes from his coma to find the ship icebound and abandoned, and Elizabeth on deck, frozen stiff. Footprints lead away from the ship to a nearby glacial mountain. Frankenstein follows and finally confronts the Creature, asking and receiving its forgiveness for his lousy parenting skills. They embrace just as the entire ice formation collapses upon them both. 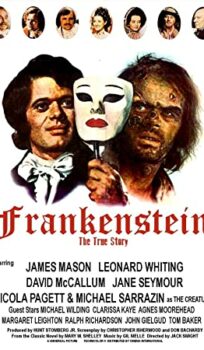