This story takes place in the 70’s during the Nixon Watergate scandal and has 3 subplots that all converge and intermingle.  Also, it is supposed to be very faithful to the Elmore Leonard novel.

He is a cop who works with in a bomb squad.  On his last day with that unit, he is unable to save a ruthless drug dealer named Booker who gets blown up in his home in the opening scene.  He has been transferred to sex crimes and he gets introduced to Greta Wyatt (Sabina Gadecki).  She is accusing perpetually drunk filmmaker Woody Ricks (Crispin Glover) of raping her.

Donnell is taking care of Woody.  He knows that Woody is wealthy and has lots of enemies and will probably get himself killed eventually, so he is trying to trick Woody into putting Donnell into his will.

They blew up a cop car and went to jail because someone turned them in.  Now they are out and they assume Woody Ricks is responsible.  Skip makes a living by doing explosive effects for movies.  Robin makes a living by writing trashy romance novels.

Chris goes to Woody’s house and arrests him after Greta already went over and tried to attack Woody.  This action gets Chris suspended from the force, but he continues to show up at Woody’s house to make trouble.  Greta and Chris become an item and she decides to settle with Woody for $10,000 to put this incident behind them.  Also, she admits that she was very intoxicated and can’t really remember what did or didn’t happen and she realizes that she doesn’t have any proof since it happened so long ago.

Skip and Robin become acquainted with Mark Ricks (Andy Dick), Woody’s brother, who has a grudge with Woody.  He is offering them $1 million to blow his brother up.  They rig Woody’s car to blow up when someone opens the door.  Donnell discovers the bomb when he opens the trunk and then when Mark comes over, he tricks Mark into opening the door getting himself killed instead.  They later send over another explosive that Donnell throws in Woody’s pool and he calls Chris over knowing that he was in a bomb squad.  Chris and Greta show up and he gets Donnell to pay him $10,000 to disarm it.  He removes it from the pool, confirms that it was never armed, takes his money and gives it to Greta so she won’t have to ask for any money.  He puts the dynamite in a trash bag at Woody’s house and they leave.

Skip and Robin continue their quest to kill Woody, and conspire with Donnell after he tricks Woody into signing a will that gives Donnell at least $5 million.  Their plan is to sell the rights to two of Robin’s novels to Woody for $2 million and split the money up after they kill him.  To avoid a paper trail, they’ll have Woody transfer the money into another bank account and then they’ll get a check for the amount from that account.  Skip and Robin also plan to kill Donnell to get a bigger cut once this is done.

The night they show up to carry out the mission, Greta also shows up to return the check because she doesn’t want any money from Woody and Chris shows up to make sure Greta doesn’t get in any more trouble.  Skip and Robin take everyone hostage.  Earlier Donnell noticed that Skip brought over a box with dynamite in it and placed it in the garage, but later he went to the garage to take out some trash and noticed the box gone and he also noticed the light for the garage wouldn’t come on and the door to Woody’s Mercedes is locked even though he remembers leaving it unlocked.  He and Chris talk about what he noticed and Chris figures out that the garage opener is probably rigged to blow up and starting up the Mercedes will deliver enough charge to detonate it.  They figure out that Skip and Robin will probably have Woody, Donnell, Chris, and Greta get in the car and then blow them up.  However, he also tells Donnell that the bag of trash he was taking out had the bomb that he removed from the pool earlier and he has rigged it up in Woody’s desk next to the checkbook.  Donnell laments that Woody’s will was in that desk but he begrudgingly goes along with the plan anyway.  After Skip and Robin get Donnell to transfer the money over, Robin goes to the office to grab the checkbook.  Chris taunts Skip with the fact that Robin’s going to blow herself up and explains what he did and when Skip asks how a sex crime cop could arm an explosive, Chris tells him he used to work in a bomb squad.  Skip runs to the office to stop Robin but is too late.  As he’s entering the office, she’s opening the desk and they both get killed in the blast.

The last scene is a week later where Donnell and Chris are in the blown up office and Donnell is getting bids on renovating it.  Chris tells him that he and Greta are happy together and he gets in his car to leave.  After Chris and Greta leave the residence, the garage randomly blows up (possibly from the car’s ignition giving a delayed charge) and Woody barely notices due to his intoxication.  It’s not clear whether or not Donnell was caught in the blast. 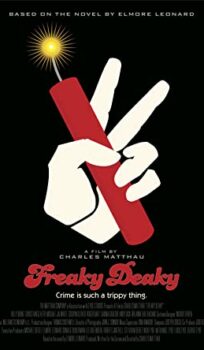