Sgt Milton Warden (Burt Lancaster) and Karen Holmes (Deborah Kerr) end their affair because he is “married” to the Army.

Maggio (Frank Sinatra) is sentenced to six months in the stockade for public intoxication and is basically beaten to death by Sgt. Fatso Judson(Ernest Borgnine).  Maggio does escape the stockade and dies in Prewitt’s (Montgomery Clift) arms.  In an act of revenge, Prewitt stabs Fatso in the and he is also wounded.  Prewitt makes it to his girlfriend Lorene/Alma’s (Donna Reed) house and recuperates there.

Captain Holmes is forced to resign after the Army discovers he tried to bully Prewitt into joining the boxing team.

A couple of days later Pearl Harbor is attacked.  Prewitt decides to rejoin his regiment and winds up being killed by friendly fire.

As Karen and Alma leave the island, Alma explains to Karen how her fiancée was killed on December 7, 1941.  She describes him as a bomber pilot who was killed while trying to get to his plane.  (Although we know what really happened). 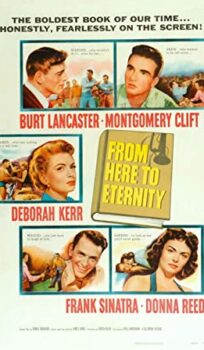