Pooper:
Yasmine is the only survivor, but she kills all of the Nazi family members except for Eva (who helped her escape). Yasmine leaves the Nazi’s home, only to learn that the French President has quashed the riots opposing his rule. The film ends with Yasmine surrendering herself to the cops.

Long Ending:
In modern day France, a President with far-right/fascist views has been elected. Riots break out throughout Paris, with the rioters hoping to bring down the President. A group of young Arabs/Muslims take advantage of the chaos to steal some money so that they can leave the country. This includes Alex (Aurélien Wiik), his 2-month pregnant girlfriend Yasmine (Karina Testa), her brother Sami, and their friends Tom (David Saracino) and Farid (Chems Dahmani). Sami is wounded during their robbery and the police are combing the city for them. The group splits up. Tom and Farid leave with the money to spend the night at a hotel near the France-Germany border while Yasmine and Alex bring Sami to the hospital before catching up with the others at the hotel. Sami dies in the hospital.

Tom and Farid find an isolated hotel in the French countryside and text Alex and Yasmine the address. They are seduced by the sisters running the motel – Gilberte and Klaudia. Afterwards, Tom brashly insults Gilberte and is then attacked by their brothers Goetz (Samuel Le Bihan) and Karl. Tom and Farid manage to make it to their car and attempt to escape. Goetz follows in a jeep and drives the two off the road where their car falls into a big mineshaft. Therein, they are attacked by deformed, creepy children crawling on all four. As they try to escape through a small tunnel, they end up in a slaughterhouse where Tom is knocked unconscious by a third brother named Hans. Farid manages to hide elsewhere on the grounds.

Yasmine and Alex arrive at the hotel and they are taken by Gilberte and Klaudia from the hotel to the family’s house where they are told that Tom and Farid are staying. There, the pair meet another sister named Eva, who has spinal issues and is looked down upon by all of her siblings but Hans. Alex excuses himself to go to the bathroom, but takes the opportunity to look around the property. He finds Tom suspended on meathooks in the slaughterhouse. He tries to rescue his friend, but Tom dies before he can. Alex returns to the main house to get Yasmine and flee, but the pair are attacked and taken prisoner by the family.

It turns out the family are led by an old cannibalistic Nazi named Von Geisler, who moved to the French countryside after World War II to build a pure race. He is raising the children to be racist killers who will carry on the Nazi legacy. Von Geisler decides that, despite her impure blood, Yasmine will be Karl’s wife and that they will raise her child as their own. Von Geisler then executes Alex. Hans and Karl also hunt down Farid and kill him. It is obvious that Eva and Hans do not enjoy the families’ murderous ways, but are too obedient to do anything against them.

Yasmine is chained up in Eva’s room and has her head shaved. Eva explains that she was adopted into the Von Geisler’s family (just as they intend to do with Yasmine’s child). She says that the children living in the mine are hers with Von Geisler. Although the children are intellectually disabled and deformed, she loves them and will not abandon them.

Yasmine is brought down to dinner with the family. There, Von Geisler formally announces that Karl and Gilberte will take over as the new heads of the family. As they toast the future, Yasmine grabs a butcher knife and takes Von Geisler hostage. The brothers grab guns, but Von Geisler instructs them to let her go so she will not kill him. Hans ignores his father’s order and shoots at Yasmine, but misses and kills Von Geisler (it is unclear whether he does this on purpose due to the abuse). Karl shoots and kills Hans as Yasmine flees into the mines.

Karl and Goetz follow her down there, and she manages to kill Goetz. Karl beats her and is about to shoot her dead, when he is shot dead by Eva. Mourning the death of the only family that treated her well (Hans), Eva decides to help Yasmine escape. The other sisters attempt to kill Yasmine, but she defeats and kills them both. Yasmine asks Eva to leave with her, but Eva says she cannot abandon her children.

Yasmine drives off away from the compound. On the radio, she hears the right-wing police have quelled the resistance and that the president is fully in charge of the country. She stops at a police roadblock, exits the car, and surrenders herself to the police. The film ends with Yasmine’s future unclear. 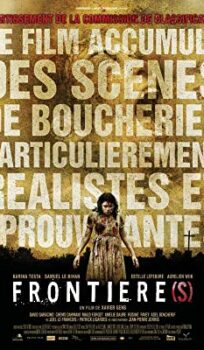