Ray (Melissa Leo) decides to risk one more crossing with Lila (Misty Upham) after Christmas in order to get the money to pay for the double wide she has been trying to get for her family the whole movie. Immediately, things start going wrong, culminating in a police chase after they get back to the US with their “cargo” (two Chinese women entering the country illegally).

They flee to the reservation, where the police have no jurisdiction, but the troopers will not leave. The reservation leaders, led by Lila’s mother-in-law (who blames Lila for her son’s death), make a deal with the troopers: they will surrender the illegals and give up one of the smugglers. It is assumed that Lila will be the one they give up because she is simultaneously exiled from the reservation; she will go to jail and never see her one-year-old son again. Ray tells Lila that it has to be that way because she cannot bear to be parted from her own kids, and at least Lila will know that her mother-in-law will raise the baby properly. Ray leaves to sneak off of the reservation.

Lila is preparing to give herself up to the police when Ray bursts back inside. She has changed her mind and wants to give herself up to the police. She reasons that as a white woman, she will get a much more lenient sentence than Lila and will be reunited with her family in a couple of months. She gives Lila the money from the crossing and asks her to take care of her sons until she gets back to them — and since Lila has no place to go after her banishment, this will give her a place to live. Ray also encourages Lila to reclaim her baby, who had been taken from her immediately after birth by the mother-in-law.

Lila takes her baby back from her mother-in-law and flees the reservation. Ray uses her one phone call to explain her situation to her teenaged son and to tell him that Lila will be arriving to take care of them. She has talked to the troopers and they have promised that, as a white woman with no record, she will be released in four or five months as long as she cooperates. Lila arrives at the house and places her baby on the floor, where Ray’s younger son plays with him. 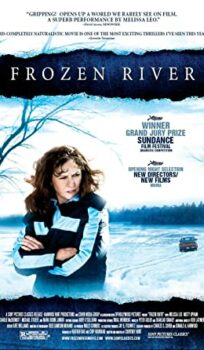