Futurama: The Beast with a Billion Backs(2008)

Fry, after getting into a fight with Bender, stows away on Zapp Brannigan’s ship when they decide to go to war with the harmless tear in the universe. The attack fails, and actually ends up killing Kif. Fry, however, floats into the anomaly, and passes through unharmed to find a giant white monster with one eye and millions of tentacles. Upon meeting fry, the monster pushes it’s tentacles out into Fry’s universe.

The tentacles begin to latch onto people. Leela, the last person with no tentacle, confronts the lead tentacle with information she learned: the tentacles are actually reproductive organs.

Everyone is disgusted by the tentacles, and revolts against them. The lead tentacle apologizes and introduces itself as Yivo. It retracts all of it’s tentacles, but later asks if everyone on earth would like to go on a nice date with a tentacle.

Earth’s government agrees to the date, and everyone has a nice time on their tentacle dates.

Everyone warms up to the idea of living with Yivo, and travel to live on Yivo, which turns out to actually be literally Heaven. He explains that he originally gave humans the idea of Heaven… by attacking them with tentacles.

Bender, however, is extremely jealous, since only living things can live on Yivo. All of the robots in the world get bored with no humans around, and decide to attack Yivo. However, Yivo is immune to everything that isn’t made out of electro-matter, which is only found on Yivo’s body.

Fry gets very, very lonely without his best friend Bender, and sends him a letter made out of electro-matter, after promising Yivo he wouldn’t.

Bender uses this letter to cover their weapons, and attacks Yivo. After spearing him with electro-matter harpoons and boarding him with swords, Yivo is furious with Fry. He breaks up with the human race, and sends everyone back to Earth, then closes the anomaly. Earth returns to normal, and everyone is happy again. 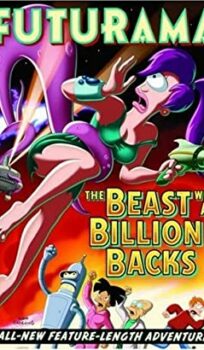