Pooper:
The remaining G.I. Joes (with Storm Shadow’s help) rescue the President, save the world, and defeat COBRA. Now that their reputation is restored, the G.I. Joes resolve to track down Cobra Commander, who is still at large (and General Colton is also now officially back in action).

Long Ending:
After the events of the first film, Duke (Channing Tatum) is in charge of his own squadron, including Lady Jaye (Adrianne Palicki), Flint (D.J. Cotrona), Roadblock (Dwayne “the Rock” Johnson) and others. He also commands Snake-Eyes (Ray Park), who is on leave to pursue a personal mission. Duke leads a successful attack on a hostile nuclear weapons facility and his group rendezvous with the rest of the G.I. Joes for a celebratory party. Unbeknownst to the G.I. Joes, Duke’s mission was a setup. The President has been replaced by Zartan, a master of disguise, whose loyalty is to the evil terrorist group COBRA. Zartan is holding the real President hostage in a bunker where they torture him for information. Zartan unveils footage of Snake-Eyes killing a foreign president and accuses the Joes of betraying the US and stealing the nukes they had just liberated. He orders a surprise air-strike on the G.I. Joes. The air-strike kills almost everyone, including Duke (who dies saving Flint’s life). Roadblock, Flint, and Lady Jaye are the only survivors (besides Snake-Eyes, who was not at the location of the attack).

Snake-Eyes is apprehended and put in the same prison where Cobra Commander (Luke Bracey) and Destro are imprisoned after the events of the first film. At the prison, Snake-Eyes is unmasked to reveal that Snake-Eyes was actually Storm Shadow (Byung-hun Lee) in disguise. Storm Shadow and another COBRA mercenary named Firefly (Ray Stevenson) successfully free Cobra Commander and blow up the prison (they purposefully leave Destro imprisoned, and it is unclear if he died in the explosion). Storm Shadow is severely injured in the process and sent to a mountain enclave guarded by ninjas to heal.

It is revealed that the real Snake-Eyes has been training with Storm Shadow’s niece Jinx (Elodie Yung) and the Blind Master (RZA). After learning of the prison escape, Jinx and Snake-Eyes invade the mountain enclave and kidnap a still-weakened Storm Shadow. Blind Master then convinces Storm Shadow that he was manipulated into killing his martial arts master by Zartan (and that COBRA has treated him poorly overall). Storm Shadow agrees to help them bring down Zartan. Blind Master then sends the three ninjas set off to join Roadblock, Flint and Lady Jaye.

The team meets with the retired founder of the G.I. Joes named General Joe Colton (Bruce Willis) and eventually draw up a plan to bring COBRA down. Meanwhile, Zartan (still posing as the president) tricks all other world leaders to destroy their stockpiles of nuclear weapons (after self-destructing all of America’s nuclear weapons). Zartan then reveals his loyalty to Cobra Commander, welcoming him into the UN. Cobra Commander unveils a set of satellites with the capability to launch giant rods from space into any point on Earth. He launches one into London, completely wiping the city off the map. Since all nations are defenseless without their nuclear arms, Cobra Commander orders the world to cede control to him or the other satellites will launch their rods.

At that point, Roadblock, Flint, Snake-Eyes, Jinx and Storm Shadow attack. Cobra Commander gets away in the ensuing scuffle. Storm Shadow kills Zartan and Roadblock kills Firefly after disarming and self-destructing the COBRA satellites. Meanwhile, Lady Jaye and General Colton free the real president from the bunker where he was being held. 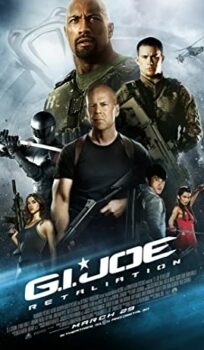